Here is the market report for April 2014. This is the 5th Edition of my Southeast Asian Beef Market Report and you can find the other market reports on the right side of this page in the box labeled ‘Market Reports’, where they are available to download. Please offer comments or feedback by posting directly to this blog with the ‘comment’ option, or contact me by email.

Summary
• Indonesian live cattle prices are in free-fall with quotes down to
Rp33,000 from Rp35,000 last month.
• Supermarkets in Jakarta are offering imported Australian chilled
boneless beef for as low as Rp64,000 per kg.
• This price, for legally imported Aussie beef is now lower than smuggled
Indian Buffalo Beef.
• The Thai government has commenced negotiations with China to
export live cattle which may further strengthen the case for imports of
Australian feeders into Thailand as replacements.

Indonesia
The price slide continues with the question now being, how low will they go?
Pressure is coming from a number of sides with strong live import orders for Q2
(large numbers in preparation for Ramadan) requiring feedlot space to be made
available forcing sales of fat cattle into a weakening market. At the same time large volumes of imported box beef (mostly Australian) are putting huge pressure on prices.

Feedlot sales have been slow for the last month as importers try to hold their cattle back in order to reduce the pressure for lower prices. Unfortunately, with the majorty of feedlots at close to full capacity and shipments of large numbers of Q2 feeders starting to arrive in preparation for Ramadan, the fat cattle have to go. For the first time this year, some importers are offering credit to butchers to assist with sales. Other importers are offering special deals with further discounts for larger consignments, guaranteed carcase %, and other special incentives on top of the lower prices.

Many Jakarta supermarkets have special deals such as Rp64,000 for Australian
chuck and blade, representing a massive price reduction from generally more than Rp100,000 per kg only one month ago.

Wet markets in Medan (where live prices have not fallen as much as Jakarta) have further reduced the cost of beef by creating a shandy of freshly slaughtered beef, imported beef and smuggled frozen buffalo beef to force the “fresh” wet market beef price down to Rp82,000.

The sales of Aussie beef in the Jakarta supermarkets at a significantly lower price than smuggled buffalo beef (in Medan, North Sumatera) must be a major milestone for the global beef trade.

While some of the discounted prices available in Jakarta today are below the
Indonesian Government’s “Trigger Price” for cattle and beef imports, nobody
expects this to lead to an activation of import restrictions at this stage although the management of this policy instrument during the electoral process is not something that anyone can confidently forecast.

Low prices ex-feedlot are also putting pressure on importers to allow cattle to
move outside the ESCAS supply chain were the live prices are generally Rp2000
per kg live weight higher.

Truck shortages contributing to discharge delays in Jakarta have turned out to be not quite accurate. It would appear that the importers could easily access additional trucks but the price would be a little higher than the rates they are happy to pay now. As a result, exporters pay massive demurrage bills while importers save very modest amounts on trucking.

It has now been advised that the importation of cattle into East Java will not be
happening until after the upcoming Govenorial elections later this year. The
opening of the trade also appears to be linked to the election of a specific person
for Govenor, so the recent optimism for this new market has vanished. 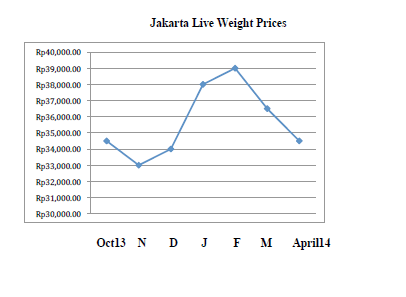 The Vietnamese/Chinese border is around 400km north of Hanoi. The main trade across the border is live local cattle and frozen beef. Both these trades are illegal.

A very small quantity of live cattle are killed close to the border with some of that meat being smuggled across from Vietnam to China. Given the traditional slaughter methods used in Vietnam and the distance from the Hanoi to the border, live cattle trading is the most effective way to move Vietnamese cattle in to China.

The role of the Australian cattle is to both replace live cattle imports from other SE Asian neighbours as well as the Vietnamese cattle that are sold into China at
premium prices. Demand for live cattle exports to China is growing as are demands for domestic beef consumption within Vietnam.

There were some difficulties with the reporting from our Vietnamese agent this
month so there is no quote in this month’s report.

Prices have firmed in Thailand this month after the opening of official negotiations for the export of Thai live cattle into China. While smuggling is already extremely active, this move to legalise the export of live cattle to China could allow larger numbers to flow from Thailand leading to a similar situation as Vietnam where Australian feeder and slaughter cattle fill the vacuum for local consumption.

Despite all predictions to the contrary, cattle and beef (and pork) prices continue to rise further due to inadequate supplies of both beef and pork. This appears to be linked with optimism for the Philippine economic situation generally. 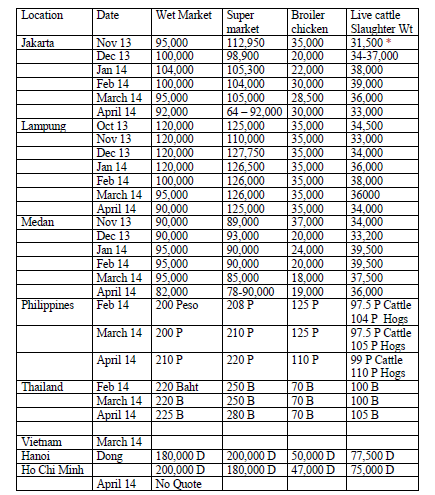