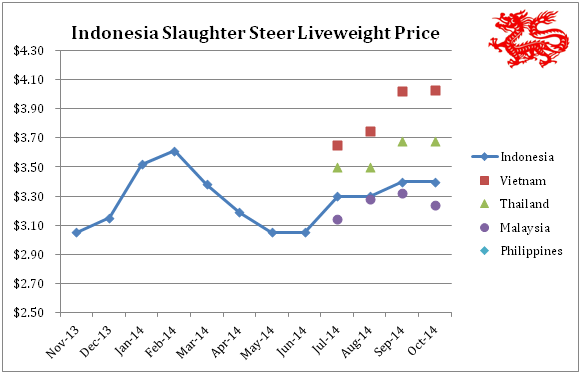 Note: Philippines price is very weak and is below the range of prices shown on the graph.

Once again the slaughter cattle prices remain steady despite a multitude of issues unfolding in the background. Many of these developments will begin to exert their influence in the next two to three months.

Domestic prices remain steady while the currency has strengthened a little against the AUD$. Large volumes of box beef imports continue to enter Vietnam. The largest import volumes come from the USA, followed by India and Brazil with Australian imports in 4th place. While some of this enters China via the “grey” route it is very difficult to identify the actual volumes consumed locally and re-exported.

The domestic herds have also been enjoying a relatively disease free period with no recent Foot and Mouth Disease outbreaks. This could be a result of lower live imports from Cambodia and Laos as their cattle numbers are also at an all time low.

Vietnamese entrepreneurs are developing some major initiatives to shore up the numbers of domestic and regional breeding herds.

One large private company is in the process of establishing a number of projects for breeding beef and dairy cattle. The target numbers quoted are in the order of 230,000 head of breeders based in the highlands of Vietnam as well as neighbouring Cambodia and Laos.

A second company is planning a 45,000 head breeding project in three highland provinces of Vietnam with the first imports of breeders expected in mid 2015.

These initiatives could result in some large breeder orders from Australia.  By breeding cattle in the temperate highland areas, breeders have scope for the importation of  both Bos Taurus and Bos Indicus breeds as well as dairy cattle.

The Vietnamese government is also promoting improved production through encouraging local farmers to use artificial insemination to lift the genetic quality of the domestic herd.

Importers are concentrating the majority of their technical support efforts in the north where the market is much newer and the importers less experienced in the management of Australian cattle and ESCAS.

No change in live cattle prices with fat steers for local consumption and northern exports selling for the same prices, in local currency, as last month.

Negotiations for the feeder health protocol are continuing. With the two governments apparently in no rush to get the remaining issues resolved, it appears that the first imports might not occur until well into 2015.

Now that Korban is over and everyone has splashed out, the post festival demand is weak with prices remaining stable and volumes low.

The big news in the Philippines this month has been the closure of one of the large western abattoirs near Angeles City in Luzon. This facility has only recently undergone a major upgrade to allow it to process cheaper cows and bulls from Australia for both domestic and re-export markets. The result is not that surprising given the low domestic beef prices in the Philippines and the increased demand and prices for cull cows primarily driven by Vietnamese importers. If the diversion of these cows had not occurred due to rising Vietnamese, Malaysian and Indonesian demand (all of which can pay higher prices) then the opening of the new AACo abattoir in Darwin would have probably had the same affect.

I just had some old friends from Scotland visit me in Indonesia. They are cattle and sheep farmers in the south-west near the English border.

The prices for cattle (and sheep) in the UK are very high compared to Australia but for them these levels represent only marginal returns as their cost of inputs are very high.

Australia not only has the best cattle and beef in the world, it also has the cheapest. Even after a 30% price rise that should come following the next decent wet season, Australian prices will still be cheap compared to the rest of the world.

The author in Beijing this week.  Reports commence from China next month.