Last month I wrote an article describing the amazing developments occurring within the Vietnamese live cattle importing industry. Well, watch out because Cambodia is coming up fast right behind them.

The governments of Cambodia and Thailand signed off on import health protocols for live feeder and slaughter cattle with Australia during the latter part of 2014. The Thai feedlot business is both mature and sophisticated while the Cambodian cattle industry has traditionally been based on small holders and an overland trade route for live cattle on the move out of Thailand and onwards into southern Vietnam. The Cambodian economy is still only getting under way after the devastation unleashed during the Pol Pot era. So it seemed logical to me that Thailand would develop first as a new live importing customer to quickly restock their feedlots that have been depleted by their shrinking domestic herd and the financially rewarding live export trade to China. Minimal infrastructure spend for a quick and profitable turnover. Cambodia, by contrast, was essentially a green-field site, significantly poorer than Thailand and obliged to start from scratch. No contest.

While a small number of Thai importers are currently preparing to receive their first shipment, the action in Cambodia has been spectacular. Reliable sources have confirmed that there are 4 large feedlots currently under construction with an estimated one-time capacity of about 50,000 head and there are unconfirmed reports of several more. I have seen photos of two large western style abattoirs under construction to process cattle from at least two of these feedlots.

With the benefit of hindsight, the reasons for this are now quite clear. The mature Thai feedlot industry is primarily owned and managed by local, mid-level entrepreneurs who, in most cases, make their primary income from the beef and cattle business (just like in Australia). They also have an expensive but steady alternative supply of feeder cattle from Myanmar. Cambodia however, essentially had a traditional beef industry based on a large number of subsistence farmers and cattle traders so their feedlot business had to be built from zero. Given the nature of Cambodian politics and their relatively weak economy, the only players that can step in and start this type of large scale cattle project are wealthy entrepreneurs or large corporates that have the necessary political clout as well as healthy external cash flows to fund the long winded and capital intensive development of a cattle importing, fattening and processing project from scratch.

And that is exactly what has happened. Large, wealthy, well-connected companies from Cambodia, Malaysia, Vietnam, China and elsewhere in the region have seized the opportunity and stepped up with their capital and got started. Some of the earlier starts should be ready to receive Australian cattle towards the middle of 2015.

Cambodia sits in an extremely strategic position in terms of the South East Asian beef trade. It is a poor country with a relatively low human population (about 15 million) and large areas of agricultural land wedged between the incoming flows of live cattle from Thailand (ex Myanmar) and the massive demand for cattle, buffalo and beef imports from the wealthy Ho Chi Minh region of Vietnam. It has plenty of cheap labour, water resources (the Mekong River runs right through the middle) and lots of agriculture producing significant quantities of waste products well suited to feeding cattle. I have also just learned that because Cambodia’s soils are relatively poor, the agricultural sector has been importing compost from cattle and other sources from neighbouring countries for some time. The new feedlot industry will also serve as an additional source of valuable soil nutrients.

Cambodia’s economy produced GDP growth of 7.2% during 2014 with textiles and tourism their two largest industries. Agriculture is the main source of income in rural areas.

In addition to live cattle imports into Cambodia by ship, some Vietnamese importers also plan to send their feeder cattle overland into Cambodia for fattening and then return them for slaughter in Vietnam. This new trade route is currently having its first supply chains audited for ESCAS compliance.

The border between Cambodia and Vietnam is a long one with plenty of places for cattle to cross. Some cross at the official entry point of Tinh Bien in An Guang province while others prefer to avoid the official fees and processes and cross at numerous other “grey route” locations. 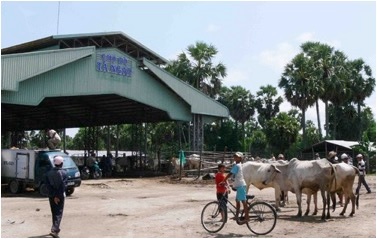 The official border-crossing sale yard at Ta Ngao at Tinh Bien, An Giang province, the largest cattle market in the Mekong delta, selling about 5000 head per month.

Legal imports on their way to Ho Chi Minh City after purchase and processing at the official border crossing. 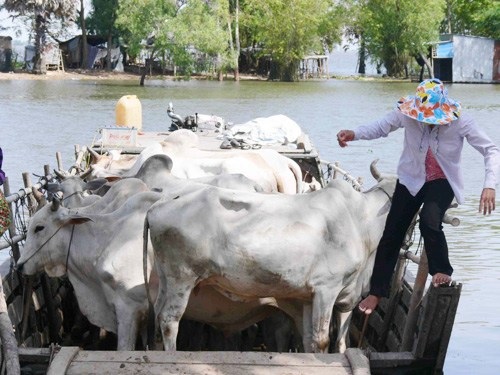 Cattle shipping Cambodian style – crossing the Mekong Delta tributaries – Grey cattle travelling on the “grey route” from Cambodia to Vietnam. No duties, no taxes, no vaccinations, no worries.

Cattle on the road in the border area travelling the “grey route”. No waybill book required here.

These rapid developments in the Cambodian cattle trade are further great news for the Australian cattle industry as every new market contributes to improved overall demand and reduced volatility. The rapid development of this and other new markets supplying beef to 2 billion consumers in Asia represents some of the best news that beef producers have had in 3 generations.

One thought on “Go Cambodia”