“Nineteen Eighty Four” is a novel written by George Orwell in 1949.  The story describes a mythical future society run by a privileged Inner Party and headed up by a tyrannical leader called “Big Brother”.  The society elite used their power, including omnipresent government surveillance for their own selfish purposes leading to rebellion from those who they oppressed.

Fortunately Mr Orwell’s vision for the future has never eventuated for the human race, but it has for cattle in the live export trade although in this case the motives are much more noble.

One of the main criticisms of the live export trade is that cattle may not be slaughtered in an appropriate manner in the destination country as required by the regulations prescribing humane management as per the Exporter Supply Chain Assurance System (ESCAS) and OIE.

The ESCAS system was developed by the Australian Government and industry in response to the closure of the trade of live cattle to Indonesia resulting from unsatisfactory (cruel) handling and slaughtering practices.  As ESCAS was born in Indonesia, it is also “owned” by the Indonesian industry that recognizes it as an important insurance policy to keep this essential trade open and ensure adequate beef supplies for its population of 250 million consumers.

The Vietnamese trade does not have the same history as the Indonesian market, with many participants seeing ESCAS simply as an illogical and unreasonable impost by the Australian Government.  Human nature will tell you that some players in the industry will take advantage of any loopholes in the system to allow animals to escape ESCAS and enter the domestic supply chains which generally lack consideration for animal welfare.  Consistent breaches of the ESCAS system have the potential to close the entire live export trade to Vietnam.  To prevent this from happening, some exporters and private companies have developed systems to beat the cheats and keep this vital trade open. CCTV camera and grey box that connects to the “black box” allowing RFID readers to trigger data capture and transmit to head office.

Global Compliance IT has delivered a system that bundles sophisticated technologies including some patented “black box” devices that drive the systems to provide incredible capacity to capture, transmit, manage and store huge amounts of digital data, send it around the globe and allow customers to monitor the progress of their stock online in their own offices in real time.  Big Brother really is watching.  GC provides a fully staffed operations control room in Jakarta that manages the daily activities of all facilities where GC Big Brother is installed.

As a person of more than 60 years of age, you will have to forgive me for not understanding how all of this digital stuff works precisely, and for presenting the summary of the operations of the system in a form that hopefully those with similar technical skills to me will understand.  Those readers who are savvy to this type of process can contact the company at the link below to find out all the gory details.

Currently, ESCAS requires all animals to be tracked through the supply chain using the mandatory Australian RFID eartags to verify the animal’s presence at the specific locations until slaughter in an approved abattoir.  This process is vulnerable to RFID tags being removed with the tags scanned in the destination ESCAS abattoir while the cattle could potentially be sent to any unapproved destination.

Big Brother now has this covered. 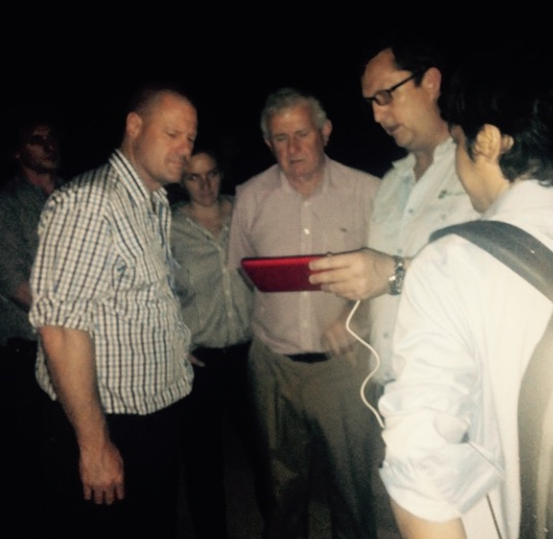 The key to this enhanced track and trace system are advanced CCTV cameras providing for still, time lapse and video footage which are linked wirelessly to patented black boxes that also receive data from the RFID ear tag readers.  These three elements work together to collect and send information about the animal back to a central database which, in this case, is another black box about as big as a house somewhere in Jakarta, where all this digital information is managed and stored.

Here is the sequence of events :-

All this data is managed at the Jakarta headquarters where the majority is dealt with automatically i.e. the system has alarms that alert the human operators that a tag has left a certain feedlot destined for a certain abattoir but failed to be slaughtered in an appropriate time period etc.   All this can be watched live (if you are really keen) by both the operations centre and the customer who can log in and see what’s happening at a certain abattoir in Hanoi at midnight … if it’s critical, or watch an action replay tomorrow morning.

Naturally there are lots of built in fail-safe mechanisms to protect data from power failures and internet blackouts etc.  While nothing will protect a black box from a sledge hammer (catastrophic failure instantly sends alerts to a long list of interested parties), the location in question will need a very good excuse to prevent their facility from being permanently struck off the approved list for receiving Australian cattle.

This process is an indication of the extraordinary lengths that livestock exporters are prepared to go to in order to protect the integrity of the ESCAS systems and in doing so to ensure that cattle producers in Australia can not only continue to enjoy the benefits of this valuable market but more importantly sell their cattle into the live export trade with confidence that their stock will be treated humanely all the way through the supply chain.  I’m sure even George Orwell would approve of this version of Big Brother.