Slaughter cattle prices in the main market area of West Java have weakened to stabilize at around Rp42,500 for fat steers while the Rp has strengthened against the AUD.  Incoming prices for Australian feeders are about Rp49,000 per kg!

Cattle supplies have recovered once again with the major issue reported by traders now being a weakening of consumer demand as retail prices remain high.  Those with in-depth knowledge of the wet market tell me that higher retail price provides a misleading impression as these higher rates quickly translate into reduced consumer demand.  This tends to create a viscous cycle for wet market traders who rely on a combination of volume and price for their income.  When prices are higher, their sales volume goes down so their gross income decreases. In order to keep their gross income stable they tend to increase their margins on their lesser sales volumes which inturn drives volumes down even further.  So importers must find a way to keep selling prices as low as possible while paying historically high prices for new imports from the Australian wet season.  Their only option is improving their performance in the feedlot.  If they are able to put the last 150+ kg on their imported feeder steers at a much lower cost than those kgs are worth at slaughter then they can break even or perhaps make a small margin.  As with most industries there are the leading bunch who can drive their feedlot performance to ADGs (without dramatically increasing ration costs) that allow them to push through the break-even point and others that try but just can’t make it.  Fortunately, Indonesia is the leader in feedlot technology in Asia so if anyone has the capacity to squeeze the very best performance out of their cattle it is them.

The demand picture is also changing geographically with Medan in North Sumatera having had prices significantly higher than West Java for about the last 10 years.  This trend has now reversed with feedlot cattle from the north being offered for sale all the way south in Lampung.  Market observers tell me that this is a reflection of the weakening of the economy in Sumatera generally and North Sumatera in particular where the big industries are palm oil and petroleum/gas production.  With both these commodities in serious decline, jobs have been lost, incomes have reduced and beef purchases are significantly lower.  Taxi drivers around Jakarta will tell you that business is declining here too, jobs are being lost and the domestic economy is slowing down.

The court case involving importers charged with manipulating market prices concluded last week with a decision from the judges expected in about one to two months.

The government has corrected the new import permit documents to allow the first Trimester imports (T1) to include the month of April. This is a major relief for exporters and shipping companies who faced a very serious threat of nil shipping for April if the documents were not modified in time. 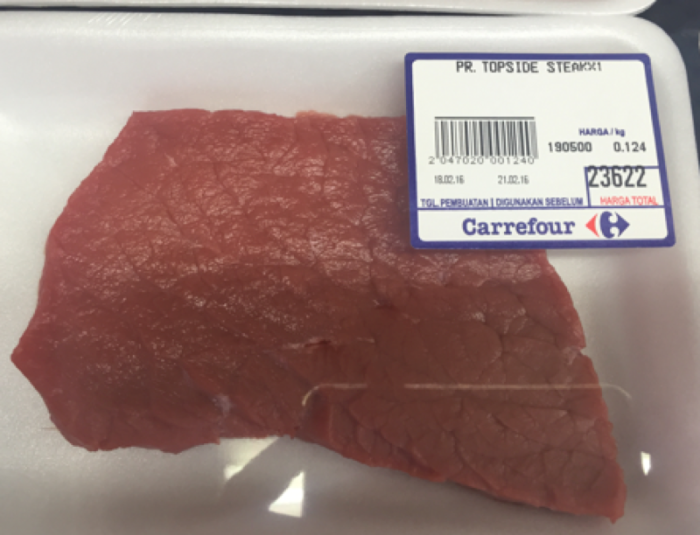 Supermarket prices remain at their usual high level but the volumes offered on the shelves are noticeably declining.  Beef wholesalers to supermarkets report a dramatic reduction in volumes and are currently unable to improve this position even with some targeted discounting.  Cheap imported cuts from Australia have been blamed for part of this reduced demand for local product.

The Indonesian government has announced that it intends to buy in the order of 50,000 breeders from Australia this year to distribute to small farmer cooperatives right across Indonesia.  This is a bold plan with the first shipment, which arrived, in East Kalimantan last November proving to be successfully distributed and managed by their new owners.  Regardless of how many are eventually imported, this will be represent a major new market for northern Australian producers.

Prices were stable across Vietnam with rates from 69,000 to 72,000 Dong per kg live weight in Ho Chi Minh City while Hanoi prices remain from 73 to 76,000 Dong.  The annual lunar new year of Tet was held from the 7th to the 13th of February and this is a time for families and friends to get together and celebrate their main annual holiday.  Eating and drinking are major activities during the holiday so prices for most popular foodstuffs are firm or at a premium during the festive season.

The currency has weakened against the AUD during February to an average of 16,100 to $1AUD.  Using the HCMC sale price of 70,000 Dong this converts to a report price for February of AUD$4.35 per kg.

Vietnamese importers have commenced using rail transport to move finished cattle from the south to better prices in the north.  I am advised that this rail transport is very effective and reasonably priced with cattle fed and watered during the journey.

Foot and Mouth Disease continues to cycle through northern feedlots but at this stage has not been reported in the south.

A large number of Vietnamese entrepreneurs are also planning to import breeding cattle to rebuild their herds and Australia has the best genetics at a price that is probably at least as good as any other alternatives.

The press has reported numerous cases of beef substitution including using chemicals and cattle blood to modify pork and buffalo meat to look like beef.

Slaughter cattle prices have slipped further to around Baht 90-95 per kg live weight for domestic slaughter as the export trade to China has all but dried up.

I visited Thailand during February and despite all the hype about Asian economies in a downturn I saw nothing of the sort with hotels, flights, roads and restaurants full to the brim. There is still plenty of high end buying in Bangkok with some Australian imported beef selling for AUD$100 per kg and US product for $150/kg. My agent in Bangkok also reports that Cambodian beef and buffalo beef are now being marketed in Thailand and for a very healthy US$15.90 per kg for beef and $15.80 for Buffalo loin cuts.  No details as yet regarding the specific source within Cambodia. See photos below. Retail prices saw a quick spike for Chinese New Year and then returned to normal during February with the price rise in AUD above due to currency movements alone.

The generally positive movements in the Philippines economy are probably the reason why this country is one of the few to report a small but significant rise in local slaughter cattle prices as well as retail rates this month.

Beijing slaughter prices are quoted as Y24.4 per kg live while Shanghai reports Y17.5.  These prices are slightly lower than last month despite the peak demand season of Chinese new year occurring during February.  My agents also report that retail prices for beef and chicken in the wet and supermarkets changed very little during February which is also unusual considering the lunar new year is the peak holiday and celebration time of the year where eating good food with family is the main activity.  The Yuan has also weakened a little against the AUD compared to last.

During my travels in February I spoke with cattle traders from Thailand, Laos and Vietnam.  They all reported the same theme in which the Chinese central government was attempting to restrict and regulate live cattle imports across its southern borders while the Chinese regional governments were actively encouraging the trade to continue.  When you consider that a regional Chinese government might represent 100 million people or more, it is easy to imagine that they might sometimes have different policy priorities from the central leadership.  It is also easy to imagine that they can import pretty much anything they want regardless of directions from the top.  The end result is a continuation of the live imports from Vietnam and what is expected to be a short term halt to the Thai border trade following a specific incident in the far west which has temporarily shut the gate.

I spent two days in Phnom Penh, capital of Cambodia, towards the end of February and was absolutely amazed at the commercial development going on in the city.  This was my first visit so I don’t have anything to judge it by but have a look at the photo below and count the high-rise construction cranes on the horizon.  I took this photo crossing the Mekong river on a ferry approaching the Phnom Penh CBD. As you can see there is incredible building activity and if I had been able to take a wider angle shot I could have got a lot more cranes into the picture.

Photo : View of the Phnom Penh CBD from the Mekong River. 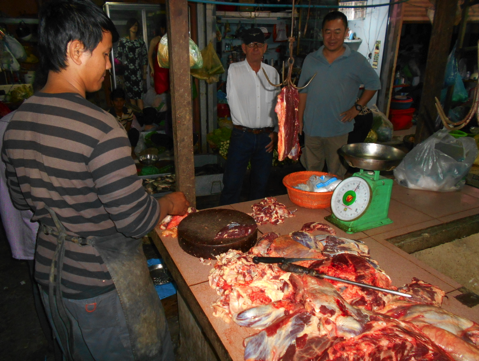 Phnom Penh wet market. Same as any other wet market in Asia except that the price of beef is 40,000 Cambodian Riel per kg or AUD$13.90 per kg.

Cambodia is one of the poorest countries in the world with one of the highest beef prices in Asia (in third place after China and Vietnam).  Admittedly this wet market beef stall was the only one in this inner city market but it was still operating regularly despite the massive prices.  The beef presented was from local cattle only.  Hotels and restaurants served a range of imported product including Australian processed beef.

There is a large, high standard feedlot and abattoir complex almost completed construction in Cambodia and my sources tell me that they are hoping to receive their first shipment of live cattle before the middle of 2016.