Slaughter cattle prices and the AUD/IDR exchange rate have remained stable during September, however importers are puzzled and alarmed by the further fall in demand for slaughter cattle.  Since the introduction of Indian beef in September 2016, the demand for slaughter cattle from both imported feeders and local production has fallen to a fairly stable throughput of roughly 50% pre-Indian buffalo meat levels.  During September importers reported a further sudden fall in demand to levels of around 40% pre-Indian buffalo levels.  Even more disturbing is that demand is not responding to discounts with importers reporting that offering lower prices had no effect on their ability to increase sales!  While this reduction is a very serious commercial problem, the most frustrating aspect is that nobody seems to know the reason for it.

I have spoken to a number of importers who have offered a variety of possible reasons for this drop in demand although all of them admit that they are not confident that they know the real reason and that their suggestions are pure speculation.  These suggested reasons include :-

Last month I described the situation for importers as a stalemate.  This month I think that the best description of their position is one of a serious fight for commercial survival.  The market situation in northern Australia can also be described as puzzling as prices remain firm despite demand continuing to fall.  I have been following the northern Australian live cattle market for close to 40 years.  In all of that time it was clear that the Australian cattle market was really one big market even though it was spread over a geographically huge area.  Cattle price trends in one part of Australia usually flowed on to other parts in a relatively short time.  The price in Queensland was always the price in the Northern Territory plus or minus the freight depending on the direction of flow.  Cattle are very mobile so if prices are better in far away prices then cattle can easily move to fill the need.  Today, the prices in southern Australia are weak while those in the NT remain strong.  Not even the traditional price reduction during the dry season peak mustering and supply period was seen this year.  This is a first.  And through a period of extremely weak demand from our traditional Asian markets!  Once again, nobody seems to know the answers as to why except to say that the numbers are down even though the NT didn’t have a drought like Queensland with NT herd numbers remaining relatively stable.

Approximately 100,000 head of feeder cattle were imported from Australia during August and September in order to recharge the feedlots following the religious festival period.  Importers are now wondering how on earth they will be able to sell all of these animals when they have finished their fattening period in December.  Even if they can find a buyer, the chances of achieving a profit seem remote.

Just to add another level of pressure to this diabolical situation, the 1 for 5 Breeder for Feeder import performance review is due early in 2018.  The Indonesian government demanded that importers sign up to this agreement before being issued with import permits in 2016 so everyone signed up to guarantee that they would comply.  At the time it was a case of don’t agree and go broke immediately or agree and go broke when the final assessment was made in 2 years time.  As this two-year deadline approaches, everyone knows that very few heifers have been imported and more than 90% of importers are likely to fail to comply with their 1 to 5 formula requirements.  I have heard on the grapevine that the industry is negotiating with the government for a modification of the formula to reflect a percentage of the feedlot capacity rather than the annual feeder import percentage. Unfortunately for the importers, they have two Ministries to deal with as both Agriculture and Trade have an interest in this problematic regulation so the degree of difficulty is doubled.

If the heifers are imported, can they be managed appropriately and contribute to the national beef supply?  Yes they can.  I recently visited a project in East Kalimantan where Australian heifers were delivered in late 2015.  The cattle at the facility below receive a level of individual care that most Australian beef producers would be very envious of.

The cow in the photo below was noticed to be having some difficulty calving at around 0500.  The local Agriculture department Para-vet (Pak Pryogo who lives quite close by) was called and had assisted the cow to calve by 0600.

I took the photo above at 1100 only 5 hours after this calf was born.  Not too many Brahman mothers in Australia would be so calm and trusting of their owner’s intervention (and the rest of the family looking on) especially immediately after birth.

As the calf was a little weak and slow to drink, Pak Pryogo milked the colostrum from the cow and fed it to the calf with a bottle. 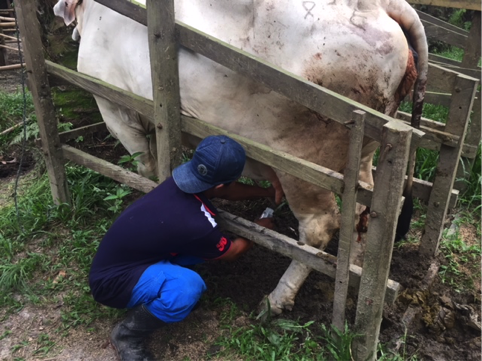 This cow was so relaxed that there was no question of it kicking Pak Pryogo as he collected some more colostrum.

It’s easy to understand the high level of attention provided to these cows as the value of each one is worth more than the farmer’s house.

Not all the projects I visit are this good but a significant number are, and many more are following this style of management.  It can work if farmers are provided with an appropriate level of training and support from their local Department of Agriculture.

There are tens of thousands of villages in Indonesia that would be capable of this type of project.

Prices have stabilized in both the north and south with rates remaining similar to last month.  Best heavy steers in the north can achieve Dong71,000 while good steers and bulls in the south have a range of Dong 68 to 70,000.  Demand for Thai cattle continues to be weak as their carcase yields remain unattractive to butchers.

The Vietnamese dairy industry is finding business difficult (like the rest of the world) leading to increased slaughtering of cull cows especially by small farmers.

Domestic prices for slaughter cattle are weakening further with some sales below the Baht100 per kg level as the market is being driven largely by domestic demand as live export sales remain at very low levels.

The beef market and the general economy continue their strength with an increase in live slaughter cattle prices during September from 110 to 120 Pesos per kg live weight.  The Peso remains steady as the Presidential war on drugs and terrorism continue without any sign of weakening.

No change in the strong RMB rates for slaughter cattle this month with fat cattle selling for RMB 24 per kg live weight in both Beijing and Shanghai.

The table below shows the slow but steady rise in prices in both reporting centres over the past 7 months.  My advice is that the trend has been stronger in Shanghai than Beijing because the capacity for consumption is much greater in Shanghai, as the consumers in this city are generally the richest in the country.  Supply also continues to weaken as beef farmers leave the industry because of low profitability and increased pressure from the government to reduce environmental pressures in Inner Mongolia and elsewhere.  This strong government push for greater protection of the grassland environments is likely to continue to reduce cattle (and sheep and goat) numbers in these traditional breeding areas of the north and northwest.  The culling of dairy cows has slowed down as the period of heat stress over the summer months has passed.

Consumer demand across the country is generally on the rise as the colder weather has begun and winter is the traditional time to eat more beef.

Fox Lumsden took this photo recently in Luang Prabang in northern Laos where too much offal is never enough.

All Asian wet markets are the same.  Their meat sections are always dirty, smelly and untidy with their product poorly presented.  By stark contrast, their fruit and vegetable sections are always beautifully laid out as though they were competing for a prize for the best-decorated stall.  Why is that? See below a particularly rough wet market meat outlet in the capital Phnom Penh.  Below that are two photos from fruit and vegetable wet markets elsewhere.  The first photo is from Sarawak and the second is from Laos.

My sister Lynn took this photo in Phnom Penh a few weeks ago. I am sure the child sleeping on the right hand side will grow up to be a beef eater. 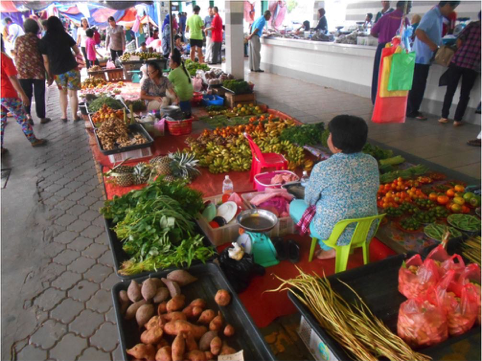 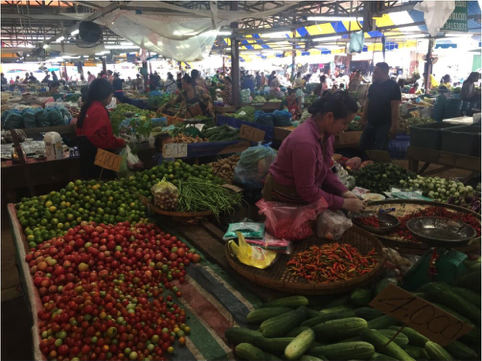 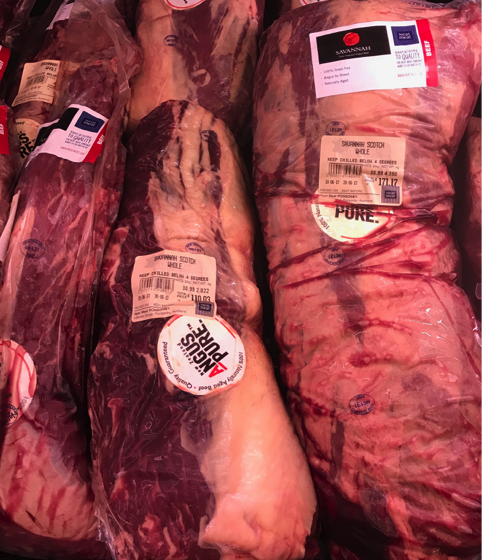 My other sister Tracey took this photo of Angus Pure beef in New Zealand recently. NZ$38.99 per kg converts to about AUD$35.48. 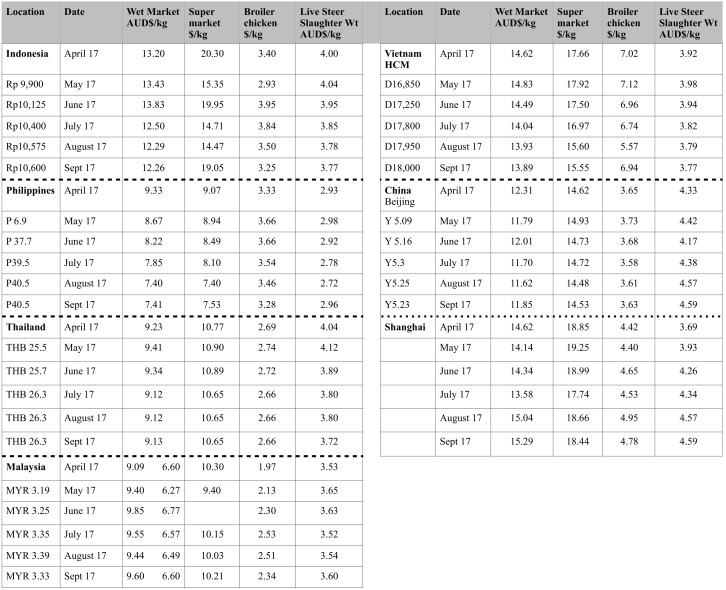