After two years of steadily falling prices, June has seen the first rise of the indicator price for slaughter steers from Rp38,000 to Rp40,000 per kg live weight. Some prices were at even higher rates during June but this could be attributed to the Ramadan and Lebaran celebrations. This upward movement is being pushed from two directions. Firstly, all feedlots cleared their stocks of long-fed, overweight cattle by early in June so there was no longer any need for discounts (and presumably credit to butchers). Secondly, not only has the back log cleared but importers suddenly find themselves in a situation of under-capacity with some already rationing their outflows to ensure that they don’t run out of stock before their next shipments are ready for sale. I have also heard reports that some feedlots have resorted to selling cattle at as low as 50 days on feed in order to keep their regular customers supplied and presumably beef up their cash flows.

This pleasant turn around also coincides with a reduction in the CIF price from Australia as noted in last month’s report. With the CIF at around AUD$3.65 at the beginning of June this implies a landed price of about Rp39,000 per kg so importers now have the luxury of a trading margin as well as a feeding margin. The big question is what will be the response by the government to this rise in prices. In the distant past, Rp 42-43,000 was seen as the acceptable upper limit by the authorities but it’s anyone’s guess what their opinion is today.

During the last few weeks there has been talk of tightening cattle supplies across northern Australia with potential for rising prices although this threat has been partially offset by a rapidly falling AUD.

As is usually the case, when one problem is solved another takes its place. In this case, now that importers are calling their exporters to place new orders, there is not enough shipping space to allow all these orders to be filled. As a result of the downturn in business over the last two years, shipping owners have gradually found alternative employment for their vessels in other parts of the world. With a significant proportion of the cattle shipping fleet now relocated to South America, the Mediterranean and elsewhere, it will take time and a rise in shipping rates to attract them back. To rub further salt into this wound, all shipping rates are paid in USD$ which has been strengthening against both the AUD and the Indonesian Rupiah. Cattle are sold from the feedlot in Rp so the freight bill, when paid in converted Rp today is much higher than the previous amount. Another compounding factor for Indonesian shipping availability is that voyages to China and Vietnam are on the rise and these destinations take a substantial part of the limited shipping space out of action for a much longer period. A single voyage to China can take about 21 days one way so when loading and discharge are taken into account, a single return journey can take as long as 50+ days. If the same vessel was employed on the Indonesian run it could have completed at least 4 voyages in the same time. The turn-around time for a single voyage to Vietnam is around 30 days.

I recently reported that no Indonesian importer has been able to satisfy the government requirement of importing 1 breeder for every 5 feeder/slaughter cattle. I am advised that there is in fact one large plantation company in Kalimantan that has recently commenced importing both feeder and breeder cattle and that their numbers may well meet the government requirement.

Industry insiders tell me that the negotiations on a compromise for the 1 for 5 rule are ongoing but there is still no sign of a resolution. 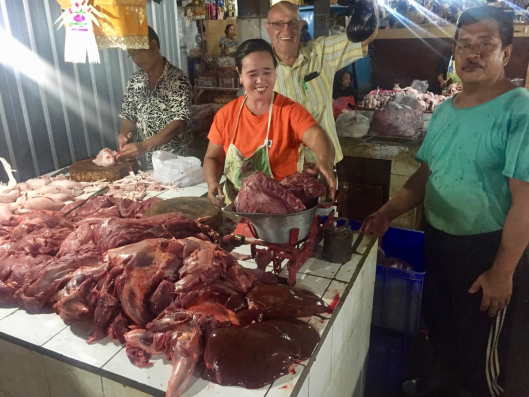 David Health is happy with his purchase of beef from Pak Momon’s table at the Tabanan wet market in Bali. Prices are similar to the rest of Indonesia at about Rp120,000 per kg. The only cattle permitted in Bali are the local Bali breed (Bos javanicus). I doubt if anyone could tell the difference between the beef from a Bali animal and Bos indicus cattle if they were prepared and slaughtered in the same manner.

Prices are firm across Vietnam with the indicator rate holding at 68,000Dong for slaughter steers in Ho Chi Minh City. The cattle importing industry continues to consolidate following the departure of two very large companies which resulted in a great deal of destabilisation in the market place. The remaining players appear to have much more conventional and sustainable business models so hopefully they can lead the industry back to a bigger and brighter future.

I was in South Vietnam last week for the first time in over 12 months and was amazed by the apparent upturn in the residential construction industries around HCMC. The overall feel of the HCMC area is one of enthusiastic growth.

Official statistics support this gut feeling with national GDP growth for the first half of 2018 of 7.08 percent compared to the same period of 2017, the fastest first-half growth since 2010.

I visited the Ben Thanh wet market in central HMC city early one morning. The meat display is well presented and much cleaner that many Asian wet markets.

Motor bike couriers are one of the most common forms of fresh meat transport in Vietnam. This courier would have probably started his round of deliveries at about 2am so he is well justified to have a quick nap after this delivery to Ben Thanh at about 0630.

A very new residential development in HCMC. About 20 x 50 story residential towers dominated by one enormous tower with about 100 floors.

Slaughter cattle rates are back up to Y26 per kg in both Beijing and Shanghai. Both agents report a slight increase in the wet market beef prices while supermarket rates are unchanged. This reflects the fact that wet markets are supplied by locally slaughtered cattle while supermarkets are largely supplied by foreign imports. The majority of imported beef is frozen with only a few countries being permitted to send fresh beef which is in most cases high priced premium product.

China has an endless supply of imported beef products. During June, France and the UK joined the long list of countries to have import bans lifted (originally because of BSE). Ireland gained access earlier this year. But the market that all the imported products can’t compete with is the local demand for freshly slaughtered product. Only those countries in South East Asia that can send live cattle into China (none legally) and Australian live imports can contribute to the insufficient local supply and surging demand for more and more fresh product.

The US market share of imported beef is very small so President Trump’s tariff dispute is unlikely to have any significant impact on domestic beef prices.

The Philippines slaughter cattle prices have eased considerably this month with the indicator rate slipping from 155 Pesos per kg in May to 140 Pesos in June. This is a reflection of a general downturn in market conditions across the Philippines. Fruit, vegetables, everything is reported to be falling in price as Filipino children go back to school and families save their money for education expenses.

Nothing to report from Thailand this month as exchange rate fluctuations are the only cause of the movement in the AUD rate above.

This is the last monthly report that I will make for Malaysia. Live slaughter cattle play such a small role in beef supply chains for both Peninsular and East Malaysia that reporting on their price movements contributes very little to the understanding of market forces for cattle and beef across South East Asia. I have to pay my agent in Malaysia for their services and I can no longer justify this expenditure given the very limited impact of the intelligence gained from the Malaysian cattle industry.

Despite this current position, it is my opinion that Malaysia will play a major role in regional beef production in the longer term through the integration of breeding cattle with oil palm plantations.

In my 10 year crystal ball picture I see Peninsular Malaysia responding to huge cattle prices in China by breeding large numbers of cattle under oil palm trees and sending them live into China on the new silk road transport routes which are already being constructed into SE Asia from southern China. 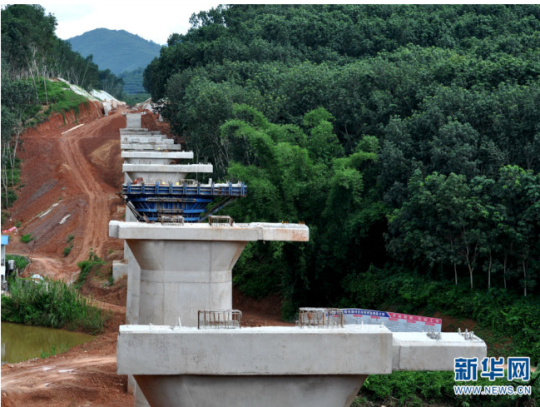 China News photo of construction of the China to Vientiane silk road railway in Laos. The long term plan for this railway is to pass through Thailand and Malaysia all the way to Singapore. 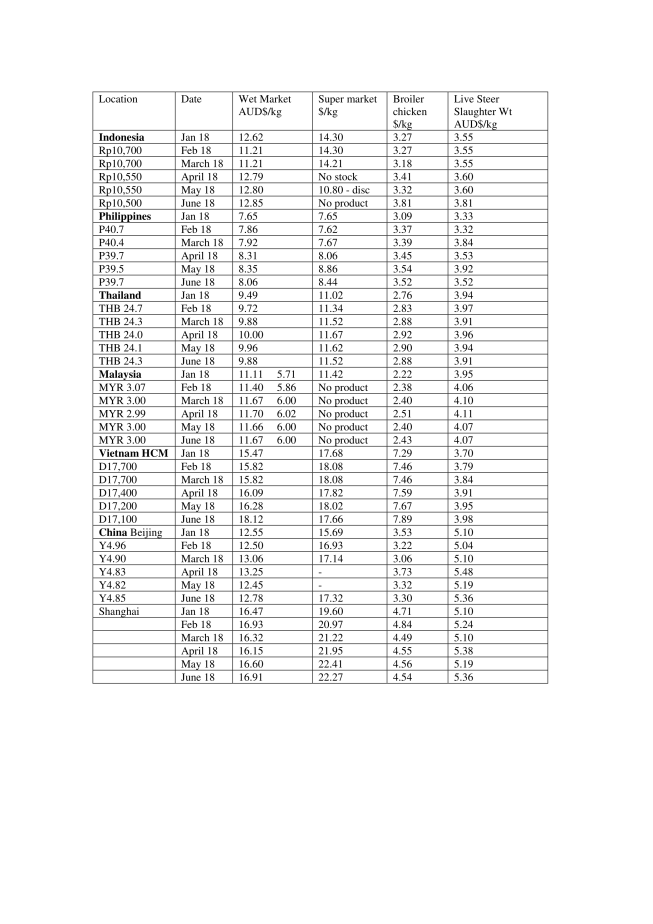