Slaughter cattle remain in short supply in Indonesia with prices firming a little to Rp40,500 for this month’s indicator rate. Post Ramadan import deliveries have been slow so feedlots continue to be understocked especially with slaughter ready cattle. I am still hearing reports of some feedlotters selling short-fed cattle in small numbers to keep their best customers in slaughter stock. A small number of ships have returned to the S. E. Asian trade region so this should help to refill the feedlots although it will be a slow process.

Importers advise that as new shipments from Australia are at higher rates, and the Rupiah has weakened against the AUD$ that the trading margin is now neutral and heading for negative territory once again. My most recent quotes from northern Australia show prices for feeder steers ex Darwin jumping up from about AUD$2.65 to $2.95 per kg live weight while those close to the market say $3 and more is probably not too far away. This still leaves lot-feeders with their feeding margin which is improving slightly with the small increase in slaughter cattle prices which may well move upwards a little further in coming months.

The religious festival of Qurban (sacrifice) will take place on the 22nd of August. Traders of cattle, sheep and goats have been in preparation for this important festival for most of July. This month I travelled to Pangkalan Bun near the west coast of Central Kalimantan. On the outskirts of the town were many temporary shelters where cattle, sheep and goats were being presented for sale to Qurban buyers. See the photo below where a temporary shelter of bamboo, timber and tarpaulins has been constructed to keep the cattle comfortable while they await sale. Qurban animals need to be clean and unblemished for presentation to the mosque so these animals are very well cared for with excellent nutrition and a daily wash to keep them looking smart. The distinctive cattle in the photo below are from the island of Madura where they breed very attractive dark red cattle which are quite popular all over Indonesia. The bulls in this photo were part of a shipment of about 300 head which were shipped to Kalimantan on a traditional wooden boat during July and distributed around the local towns especially for the Qurban festival. Prices are generally based on a per head scale with different rates for large, medium and small bulls. The bulls in this photo probably weighed from about 450 kg for the “big” group down to around 280 kg for the small group. When we converted the prices to kg live weight with some guesswork on their weights, the rate started at about Rp60,000 for the big bulls and rose to more than Rp65-70,000 for the smaller animals. Using the current exchange rate, 60k converts to about AUD$5.60 per kg for the big bulls and $6.60 for the smaller bulls. A 450 kg bull would therefore cost about AUD$2,700.

The Qurban process involves buyers paying for a specific animal which is then delivered to the mosque (or the abattoir) where the animal is slaughtered on the day of the festival with the meat packaged in 1kg bags and distributed to poor people as a charitable gesture. If individual people don’t want to buy a whole bull, it is common practice for a group of 7 people to join together and pay for the animal together. The alternative is to buy a goat or a sheep, which is assumed to be about 1/7th the size of a bull. At this stall in Pangkalan Bun, big black billy goats were selling for Rp3,000,000 or about AUD$280 per head for a 50+ kg billy. 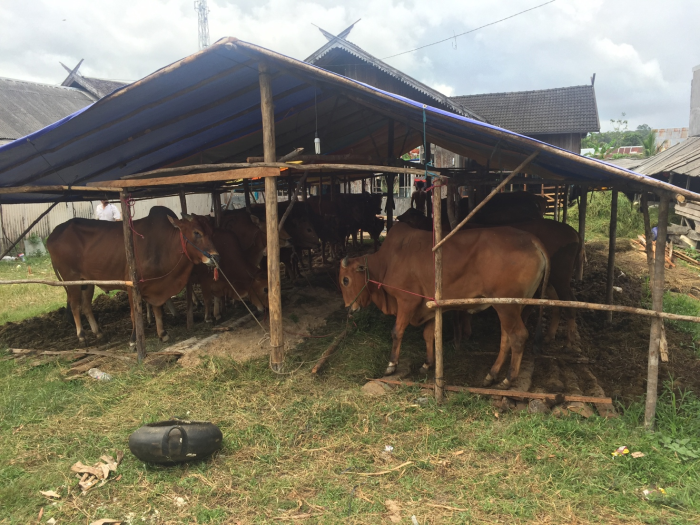 Photo : Madura bulls on the outskirts of Pangkalan Bun in Central Kalimantan.

Estimates suggest that there could be as many as 500,000 bulls slaughtered for the Qurban festival and more than 2 million sheep and goats. These male animals need to be at least 2 years old before they are eligible for presentation as a Qurban sacrifice. This implies that there must be a large number of bulls in the Indonesian cattle population as they need to be at least 2 before sale. As rates for Qurban are about 25% better than prices for slaughter cattle for the rest of the year, many farmers naturally save up their bulls for this single day of the year. The bulls in this stall appeared to be more like 3 or 4 years old.

One recent official figure for the Indonesian cattle population reports that the total population is around 13 million head. As a rough split this might be made up of say 5 million young cattle (less than 2 years), 3 million mature bulls and about 5 million breeding cows. If the annual reproduction rate is 50% then the annual calf drop will include 2.5 million calves of which 1.25 million will be males. If 500,000 per year are slaughtered during Qurban then only about 750,000 bulls remain for breeding, draft and slaughter for the rest of the year. This small number must put great pressure on female slaughter. 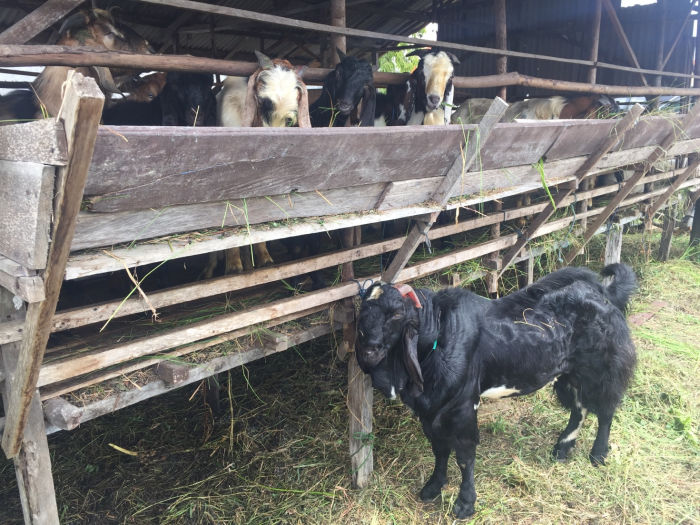 Photo : Pangkalan Bun Qurban goat. Shampooed every day to make sure he looks his best for the potential buyers. Rp3 million per head or about AUD$280. 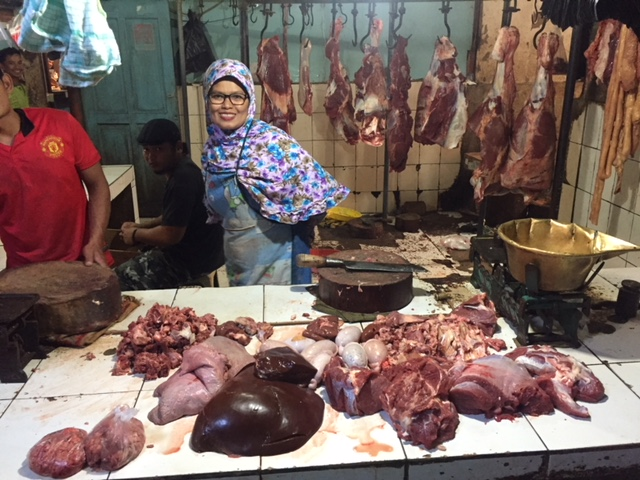 Photo : A beef stall in the Pasar Kota Bojonegoro wet market in East Java. This very happy stall holder has a full range of beef and offals to fulfil every customers needs. Prices were similar to the rest of Indonesia with beef selling for Rp120,000 per kg.

Outflows from feedlots appear to be increasing with the 100,000 feedlot capacity only filled to about 40% as imports have not been able to keep up with sales during July.

The Beijing rate for slaughter steers is slightly higher at 26.5Yuan per kg while the Shanghai quote remains at 26Y. The AUD rate is down a little on the graph above as the Yuan has weakened against the AUD (and USD). Commentators believe that this recent weakening is a result of the threat of a trade war brought on by Mr Trump increasing tariffs on some Chinese imports into the US and the subsequent Chinese retaliation.

In the short term, tariffs from the US might favour Australian products but if the trade war gets going in earnest then everyone loses.

Slaughter steers remain at 140 Pesos per kg despite the general recovery in agricultural commodity prices during July. My agent reports that wages are on the rise and consumers are spending with confidence. Prices for beef have increased a little so we can probably expect an increase in the live prices in the August report. Weather continues to be generally favourable for farmers across most of the nation with good growing conditions and an absence of catastrophic events which never seem to be far from the Philippines.

I am modifying my report for Thailand to make the indicator price an average of the bull and the steer price. The July rates for slaughter steers was THB90 while bulls were selling for THB95. I have therefore used THB92 for the indicator rate.

There are diplomatic negotiations underway between China and Myanmar which aim to establish a legal trade for live cattle from Myanmar to China across the border at Muse/Ruili. This may divert some feeder and slaughter cattle towards China instead of Thailand so there is potential to reduce the supply of slaughter stock entering Thailand as a result. 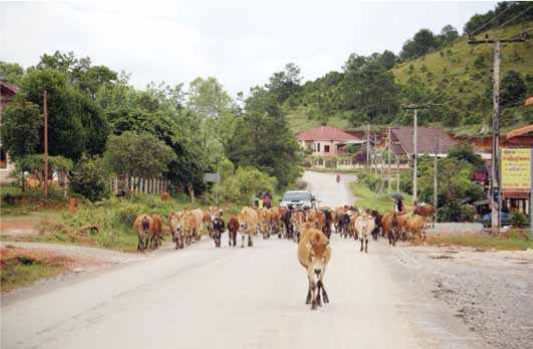 The Ban Keun cattle breeding group (63 farming families) in Vientiane province are finding that they cannot support a commercial cattle production system without government subsidies. This situation is being encountered across Asia where the traditional cut and carry production model is no longer commercially viable.

A South Australian based charity established by Andrew Costello (Southaussie with Cosi) is preparing to send a number of shipments of breeding cattle to a social project in Cambodia called “Cows for Cambodia”. The charity has 300 cows on hand in Australia and hopes to send the first 100 breeders to Cambodia early in 2019. More on this amazing project in coming reports. Check out the website at www.cowsforcambodia.com

Photo from Andrew Costello : Cattle being prepared for export from Australia to Cambodia.