After 9 months of steadily rising prices, the Indonesian slaughter cattle rate has fallen back this month from Rp43,000 in September to Rp42,000. All the advice I am receiving suggests that this is only the beginning of a significant and ongoing slide in prices as a result of a serious oversupply situation. This price reduction indicates just how narrow the margin is between under and over supply. Only last month importers were selling unfinished, short-fed cattle to ensure their customers had adequate supplies but the large numbers imported during July (60k) and August (70k) are already flowing through to the market producing a strong oversupply situation which can only continue until all of the July and August imports have worked their way through the system which could easily continue well into December.

I visited the Bambu Kuning which is the large wet market in Bandar Lampung (Sumatera) during October (see photos below) where the traders told me that their sales had been suffering since Lebaran (late July) because they were unable to pass on the steadily rising slaughter cattle prices to their customers. At the same time, the ever present Indian beef provides customers with a cheaper alternative.

The weakness of the Indonesian Rupiah is also having a significant effect on importers margins. The Rupiah has fallen against both the USD and the AUD producing a multiple negative affect as sea freight is paid in USD while the cattle are purchased in AUD. In addition, prices of cattle in the north of Australia rose roughly 5 cents per kg to end up at about AUD$3.10 per kg live weight at the end of October. This price level is likely to remain relatively stable until the drought breaks in Australia at which time the rates for cattle across the entire country will rise sharply, producing another unhappy shock for the Indonesian importers.

The first shipment of Indonesian government sponsored breeding cattle imported from Australia has arrived in central Java for subsequent distribution to small holders right across the archipelago. Two further shipments are still in the preparation stages with a possible total number of breeders imported estimated to be about 6,000 head.

The problem of the inability of importers to fulfil their requirement of importing 1 breeder for every 5 feeders remains unresolved. The only certainty is that virtually every importer will fail to comply (by a wide margin) with their signed agreement. Photo : This beef in the Bambu Kuning market was sourced from Santori, one of the largest importers/lot feeders in Indonesia with two large feedlots in the Lampung area. The prices ranged from Rp110,000 to Rp130,000 per kg depending on the cut.

Photo : At the next stall was a trader offering frozen Indian beef for Rp90,000 to Rp100,000 per kg. Traders stated that the price for Indian product is simply managed up and down to represent a discount on local product of about 25%. The product is obviously frozen and the trader told us that the customers always touch the beef to confirm that it is cold and therefore from India.

The recent natural disasters caused by earthquakes and tsunamis in Lombok and Sulawesi have made international news with some people thinking that these types of disaster are uncommon events. Indonesia is located on the geological “Pacific Ring of Fire” and as a result is constantly subjected to severe earthquakes and volcanic eruptions. The risk of such disasters is ever present and, in the event that a severe event occurs in a heavily populated area, has the potential to deliver a massive blow to the Indonesian population and their economy. See below a map which plots the location of major earthquakes (over magnitude 5) during the last 50 years.

Map : from Kompas showing the location of earthquakes in Indonesia of magnitude greater than 5 during the last 50 years.

Slaughter rates were generally steady during October with the AUD price reduction above due to a small strengthening of the Dong against the AUD. The Vietnam market remains an extremely vital alternative to Australian exporters as their number one market in Indonesia heads for a steady decline.

Photo : Dui bo is the Vietnamese word for beef knuckle. The kg price of Dong279,000 converts to AUD$16.71 per kg at the VinMart supermarket in Ho Chi Minh City. 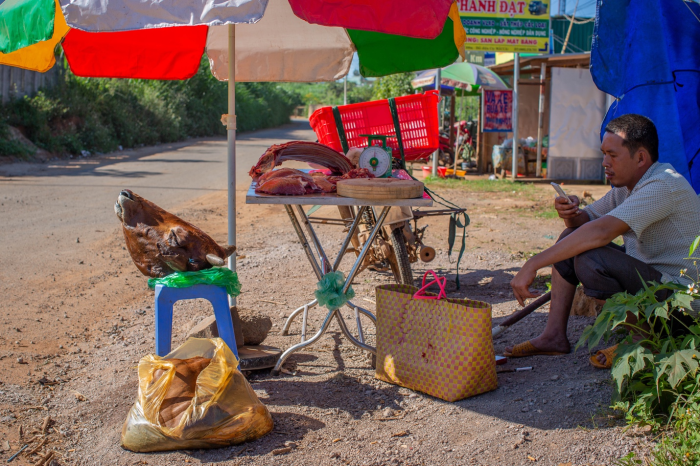 Photo taken by my good friend Dr Vinai Suwanidcharoen who was visiting Vietnam during October and passed this very efficient roadside beef stall (local cattle). The head serves as a clear advertising device while the whole outfit can be packed onto the back of the motorbike with minimal time, effort and cost.

Slaughter cattle prices remained relatively stable during October with the Beijing rate at Yuan 27 per kg live weight and the Shanghai rate holding at Y28.

The African Swine Fever (ASF) outbreak continues to spread across China with new cases identified in the far South Western provinces during October (see map below). ASF is a particularly difficult disease to deal with because it can be spread by pig products as well as live pigs. The only sound approach to control and eradication is via slaughter of all pigs in infected premises followed by a long quarantine period and total regional travel bans on both live pigs and pig products. The result is collapsing prices in areas which are under quarantine and sharply rising prices in areas that are not infected but have low numbers of local pigs. This situation creates the classic problem for officials trying to prevent transmission of the disease from infected areas. As the price differential expands between the infected/low price area and the high price/non-infected area, the financial incentive for smuggling live pigs or pig products from the infected to the clean areas becomes greater and greater. And profit driven smugglers are always more successful than government officials. 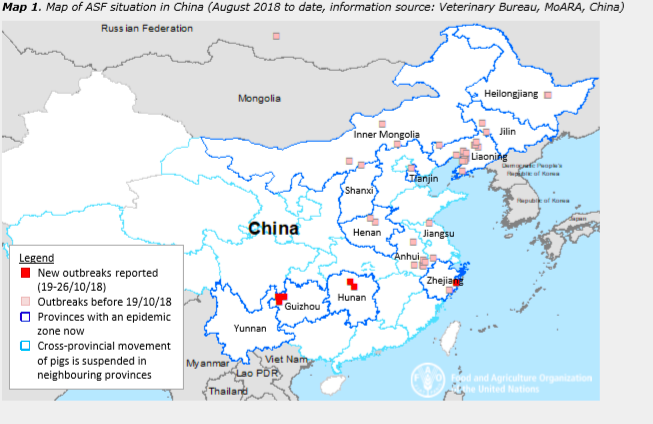 Map from recent article by Simon Quilty showing new outbreaks at the end of October in the south and south west of China.

Strong increases in both beef and live cattle prices combined with a stronger Peso has pushed the live cattle slaughter price through the AUD$4 barrier for the first time since this report commenced recording the Filipino prices in mid 2014. At that time, slaughter cattle prices were below AUD$2 per kg live weight! I am sure that Australian live exporters will be digging through their old phone books to find the numbers of their original Filipino importers who have been dormant for more than two decades. The photo below was taken by my local agent when he visited the wet market in General Santos City in Mindanao. Wet market beef prices of knuckle have lifted from Peso 345 in September to P380 in October. The supermarket price has seen a similar increase from P365 to P400 in a single month. 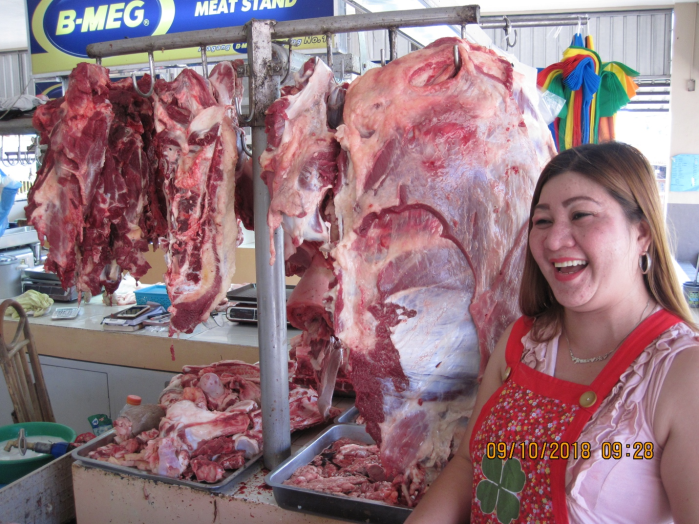 Prices have firmed this month with bulls increasing from THB95 to 98 while steers have lifted from THB92 to 95 at the end of October. My agent advises that the flow of cattle from Myanmar into Thailand has commenced again after recent flooding but the quality is still poor and not providing much competition for local stock. At the same time there are reports of large numbers of Thai-sourced cattle being trucked (smuggled) into China through the northern Lao border gate near Luang Namtha where the new Silk Road railway enters Lao from China. Some of the figures quoted were as high as 1,000 head on a single day.

I visited Chiang Mai in northern Thailand during October with Fraser Macfarlane and had a good look at the local beef industry. Thailand seems to be changing faster than many other parts of Asia with supermarkets capturing a much greater share of retail sales than the traditional wet markets. Large national and international supermarket chains presented huge displays of beef (and many other products) while the wet market offering was very disappointing. The photo below was taken at the Warorot Road wet market in China Town, Chiang Mai. This is one of the largest wet markets in Chiang Mia but only had one table selling beef and it was mixed with larger quantities of chicken and fish. We visited two large supermarket chains, Makro and Rimping, both of which had very large offerings of beef from a wide variety of sources. Photo : Fraser standing next to the small amount of beef on this table which was selling at the relatively high rate of THB300 per kg while the chicken price was only 80 per kg. Pork 140. 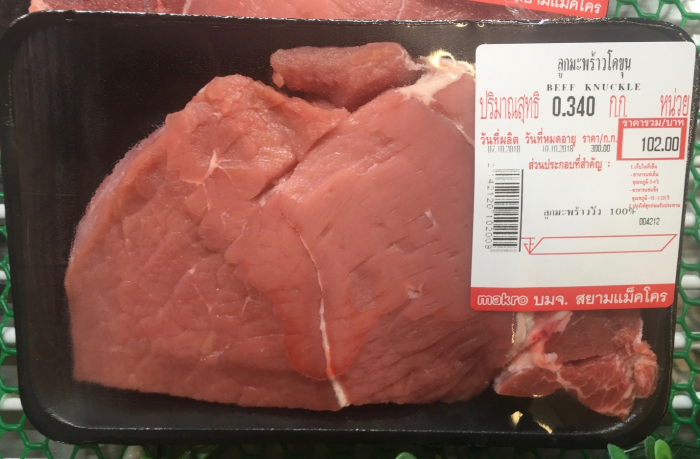 Photo : Knuckle at Makro supermarket selling for THB300 per kg or about AUD$12.77. 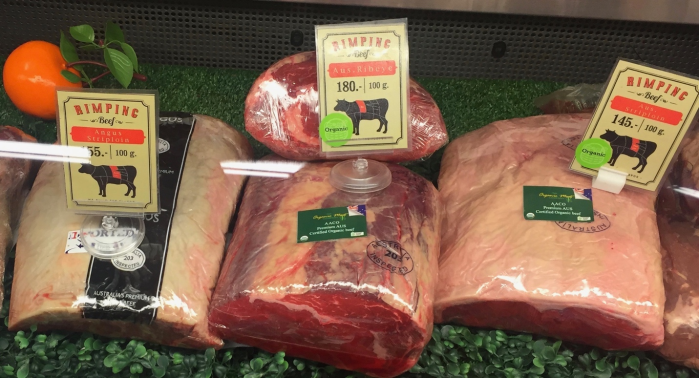 Photo : Aussie beef presented at the upscale Rimping supermarket which provided an astonishing array of food products from all over the world. Angus striploin for THB155=AUD$66 per kg, AACo Rib Eye @ AUD$76 per kg and AACo striploin @ AUD$62 per kg.

A very quick inspection in the Rimping meat, fruit and vegetable area identified fruit and vegetables from New Zealand, Chile, Australia, China, Japan and the USA and lots of lamb from Thomas Foods in South Australia. See two examples below. I must compliment the supply chain managers of this supermarket chain as the products they display are beautifully presented and in excellent condition despite their very long journey from around the world to northern Thailand. 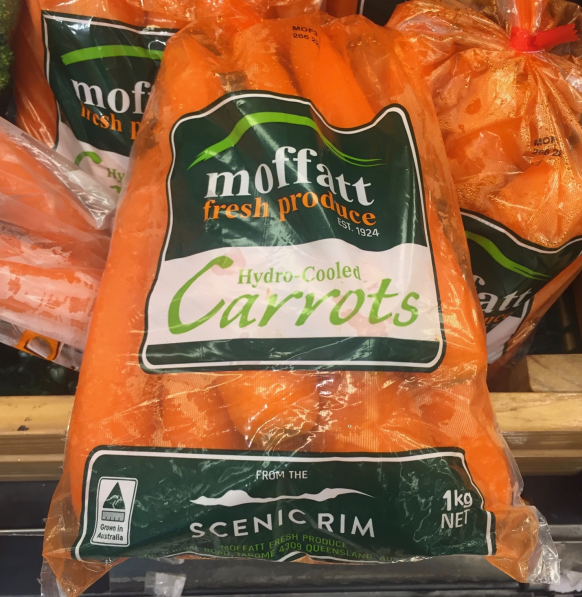 George Black sent me the great photo below. Just why this butcher is looking so happy is a mystery to me given his rather crude shop conditions but they don’t seem to be bothering him. Perhaps he just enjoyed having his photo taken.

This retail beef establishment is located in a small town in the Tigray province of northern Ethiopia where George is providing consulting services to a livestock project.