Prices for slaughter steers have slipped again this month with the indicator rate falling to Rp41,000 per kg farm gate. The general opinion around the market is that further declines are likely given the large feedlot inventories and static demand. The current increased slaughter cattle supply is a result of the exit from the feedlots of finished cattle imported in July (60k) and August (70k). These numbers were well above the previous monthly averages as importers needed to restock following the strong sales volumes during Ramadan and Lebaran. Importers are now faced with an increasing number of long fed cattle on hand and an oversupplied market place bent on pushing the price down even further. While only a moderate 44,000 were imported in September, the October imports totalled just over 81,000. Given that an outflow from 60k and 70k monthly import numbers has resulted in an oversupply situation, the market reaction to the presentation of 81k finished cattle to the butchers is likely to be very ugly result. The Indonesian slaughter cattle market is particularly unforgiving for long fed cattle as butchers start discounting as soon as cattle pass their fat depth maximum levels (generally around 10mm or less depending on individual butchers). This trigger level is relativley low in comparison to Western values as the Asian customer hates the idea of buying fat on their fresh meat. Fresh meat is sold almost fat free with the fat sold as a separate item (see photo below). Every day long-fed cattle remain in the feedlot, they cost more and are worth less as their discount for fat thickness increases. 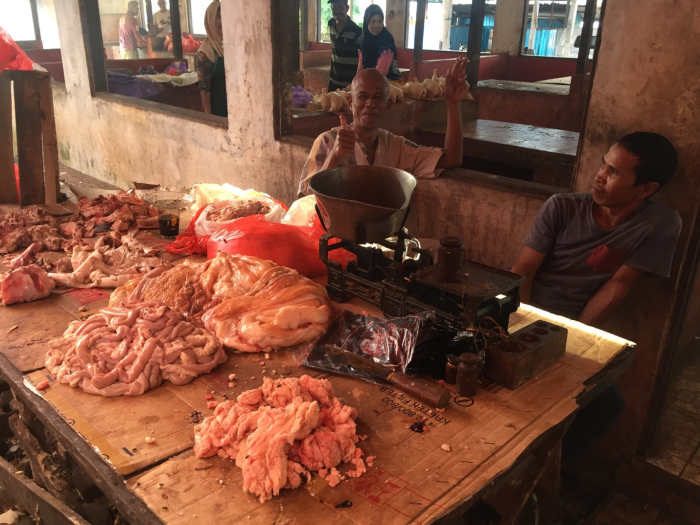 Photo : This table in the beef section of the Pelaihari wet market (South Kalimantan) sells only fat and offals.

This month I had the opportunity to visit the wet market in Pelaihari where the very friendly butchers were happy to tell me about their business. At this market (the main one in the city of about 250,000 people) 10 butchers sell around 10 carcases per day with the cattle sourced locally and from Java with origins of the cattle from both Australia and locally produced animals. Prices of beef were remarkably similar to most other Indonesian markets that I have visited with lean fresh product selling for Rp130,000 per kg. The fat that is trimmed from carcases is sold at a separate table for around Rp60,000 per kg.

In the photo below, the butcher is selling frozen beef and offal which he explained comes from a mixture of Indian and other sources including Australia. The price of the frozen beef cuts was Rp100,000 per kg regardless of its source. Indonesian frozen beef importers are able to source and supply lower quality Aussie beef to Indonesian butchers at a rate that allows them to retail it at the same price as Indian buffalo beef. 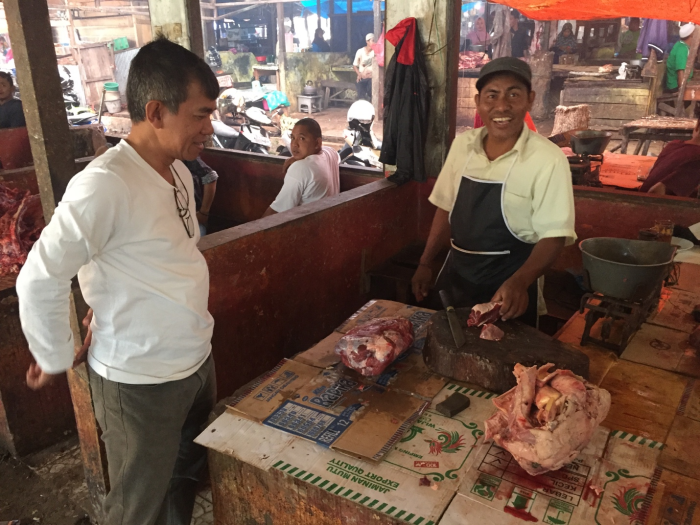 Frozen beef souced from Spain is once again available in Indonesia at rates only slightly less than product sourced from Australia. 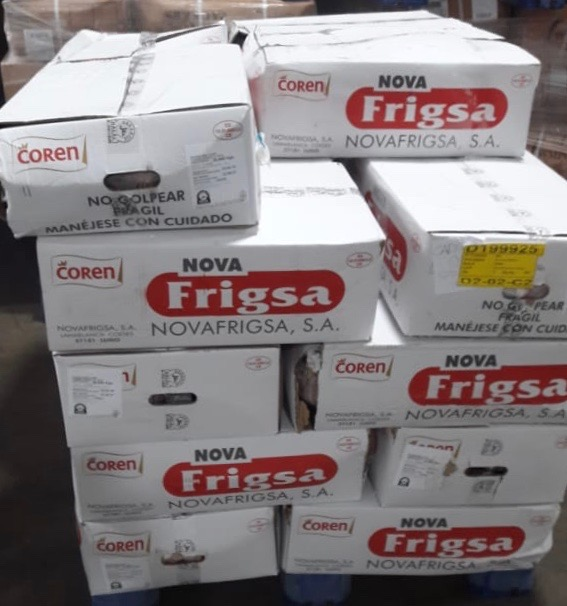 Falling feeder prices are not the only problem facing importers as their 1 breeder for 5 feeder commitment will be finally audited during December. The simple fact is every major importer will fail the audit. The penalty, set by the government some time ago, is that those who fail to comply will have their import licenses suspended for a period of 12 months which, on the face of it, would mean that there will be almost no imports during 2019. This outcome would be a disaster for the government as beef and cattle prices across Indonesia would go through the roof while national supplies of fresh beef would decline to around half of the current volumes. The public outcry would be loud and unpleasant as the last of the imported cattle from December would run out just before Ramadan which commences on the 5th May 2019. Such a scenario is totally unacceptable on political, religious and social grounds so a compromise must be found and quickly. The bottom line is that importer compliance with the 1 to 5 import policy is financially and logistically impossible so just how the government will manage to resolve this dilemma without either losing face or collapsing fresh beef supplies just prior to the peak demand period of the 2019 religious festivals will be a fascinating process to observe. Photo : This Pelaihari butcher didn’t waste much capital on his chopping blocks.

Slaughter cattle prices are rising across the board with HCMC steers selling for Dong70,000, bulls to D74k and heifers to D67k. In Hanoi prices are even higher with steers and bulls climbing to as high as D76k while heifers have lifted to D66k. Feedlot capacity remains at about 60% of a potential 100,000 head. This 100k excludes the huge facilities that have recently closed down. The steadily rising prices may well be a result of the new reset of the supply and demand equilibrium following the demise of the two largest feedlot companies that had been destabilizing the market for several years during their unsuccessful attempts to achieve viability.

The Binh Ha company, one of the largest Vietnamese feedlot operations, closed down recently following allegations of financial irregularities. The project was associated with the Bank for Investment and Development of Vietnam (BIDV). 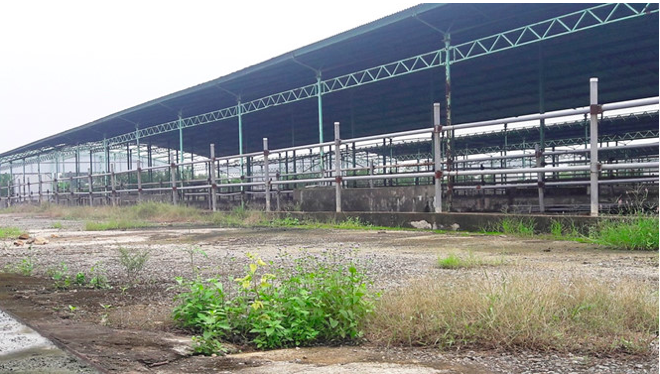 Photos from the Vietnamese press : One of Binh Ha’s several large feedlots now closed down. 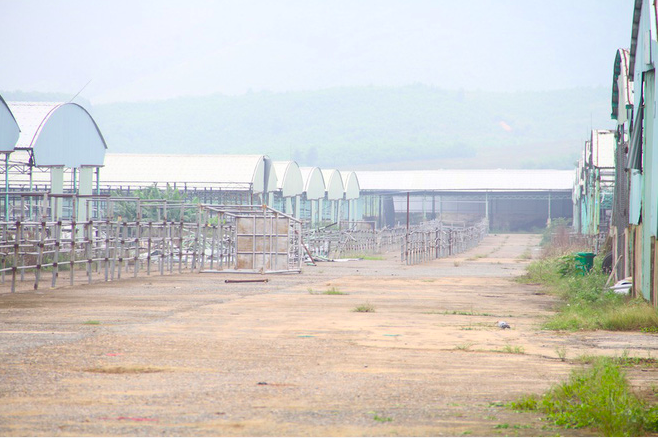 Spanish beef producers have recently been promoting their product in Hanoi and Ho Chi Minh City, with 4 Spanish abattoirs currently holding licenses to export beef to Vietnam. The Spanish officials promoted the product as high quality, comparable to beef imported from Australia, the USA and Canada. 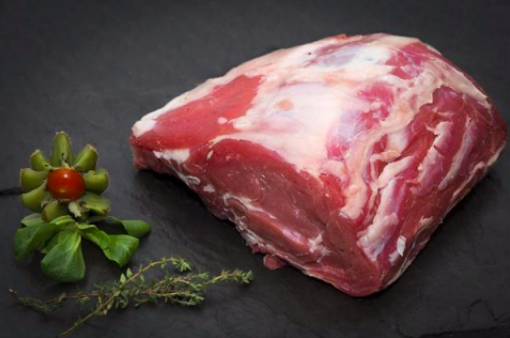 Photo from the internet : Spanish beef for sale in Vietnam.

Slaughter cattle prices have risen slightly although the AUD price above has declined a little since last month due to fluctuations in the exchange rate. Fresh beef and chicken prices have recorded rises in both Beijing and Shanghai with the largest movement in Shanghai (+5%). My agents advise that this is due to a combination of the normal seasonal rises as well as some impact from African Swine Fever (ASF). The ASF outbreak continues to spread with a total of 80 confirmed outbreaks as at the 26th of November. All the major pig producing regions are now infected and the 4 largest metropolitan areas are also infected : Beijing, Tianjin, Shanghai and Chongqing.

The disruption in the flow of pigs and pig products is magnified by the official practice of not only stopping the movement of pigs and products in the infected region but also in all neighbouring regions.

Another very concerning event has been the confirmation of ASF in a wild pig in the north east of China. This has the potential to make eradication virtually impossible leading to a situation where the disease becomes endemic throughout China which is a shocking prospect given that they have the largest pig population on earth.

Authorities have been able to confirm that the cause of the spread of disease was feeding of kitchen scraps to back yard pigs in 23 cases while movement of infected animals was identified as the cause in 13 cases.

The Chinese Lunar New Year falls in February 2019 when demand for food generally and pork in particular spike. The northern winter is trationally associated with increased consumption of meat products so the dynamics of the demand and supply equation for pork, chicken and beef are likely to be seriously tested in the coming months.

Rabo bank reported that during the first nine months of 2018, China’s official imports of beef increased by 40% year-on-year with strong growth expected to continue into 2019. While chilled and frozen been can be imported in virtually unlimited quantities to supply China’s needs, these imports cannot satisfy the demand for fresh beef from locally slaughtered cattle. This gives Australia a virtual monopoly on the supply of live cattle because freight is such a huge part of the delivery cost and all other sources of suitable live cattle are too far away. When China finally modifies its import protocol to facilitate a logical and efficient import process the massive new demand for Australian live cattle will change our industry for ever. Live exports of one million head per year would not even go close to replacing the recent decline in China’s domestic slaughter cattle supplies, not to mention the ever increasing levels of percapita consumption. 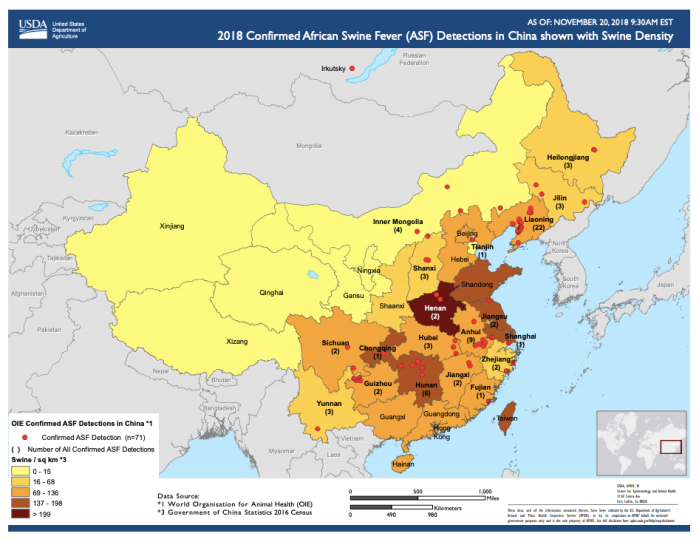 Last week, Chinese tourists from Chengdu in Sichuan province were found to have brought sausages into northern Thailand which were subsequently found to be infected with the ASF virus.

Given that more than 120 million Chinese tourists take a foreign holiday each year with S. E. Asia their favourite destination, it seems likely that it is only a matter of time before ASF is spread to China’s neighbours in South East Asia and potentially much further afield. No doubt the Australian quarantine service are on red alert at entry points across the nation.

The good news from the Philippines just keeps on coming with live cattle prices up slightly again to P157 per kg live weight. My agent reports a wonderful year for the country with political stability and a lack of natural disasters and improved infrastructure providing rising employment and consumer spending power. The good seasons have provided the markets with a full range of food products with consumers spending with confidence.

Thai slaughter cattle prices have weakened a little with steers selling at THB93 while bulls are THB96 per kg live weight. Photo : This stall in the Mekong river port town of Chiang Saen in northern Thailand has a well presented selection of fresh beef and offals. Beef here is selling for THB300 per kg which is considerably higher than the major metropolitan wet markets.

My daughter Pippa was in the UK during November and took this photo at the Brooks Butcher and Deli in Kensal Green, North London. A magnificent display of product with prices ranging from AUD $70 for free range Ribeye, $69.79 for 30 day aged Scottish sirloin, $19.35 for oxtail and $21.10 for beef short ribs and grass fed feather blade steak. 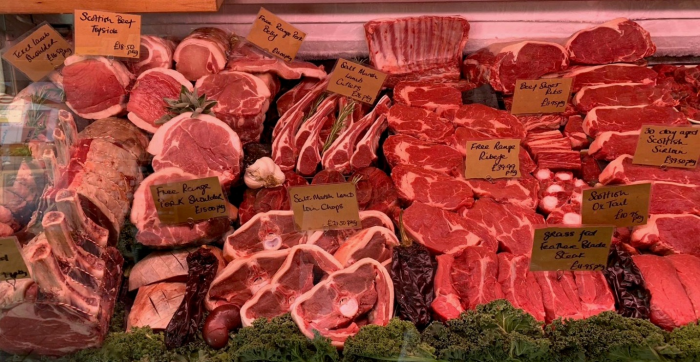 My sister Tracey was in France recently and took this photo of frogs legs in an upscale supermarket. 4 Euros per kg converts to about AUD$6.30 per kg. 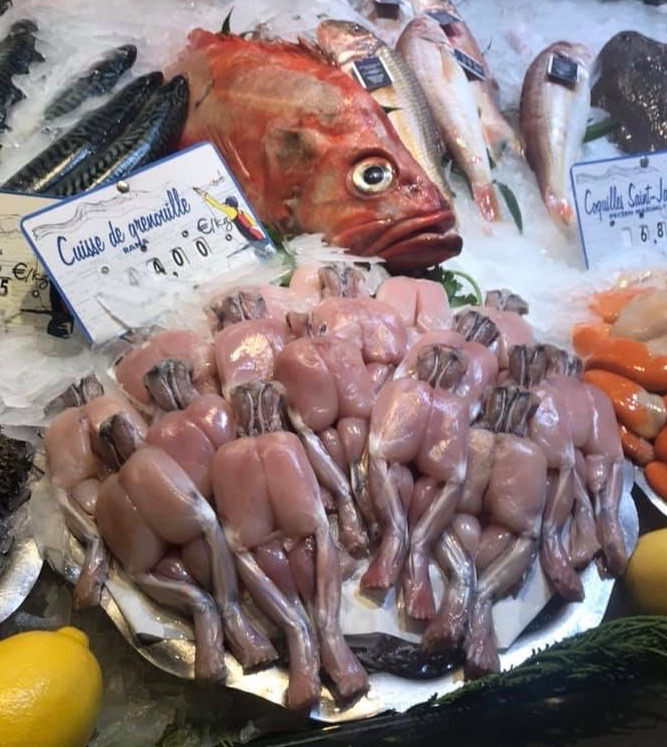 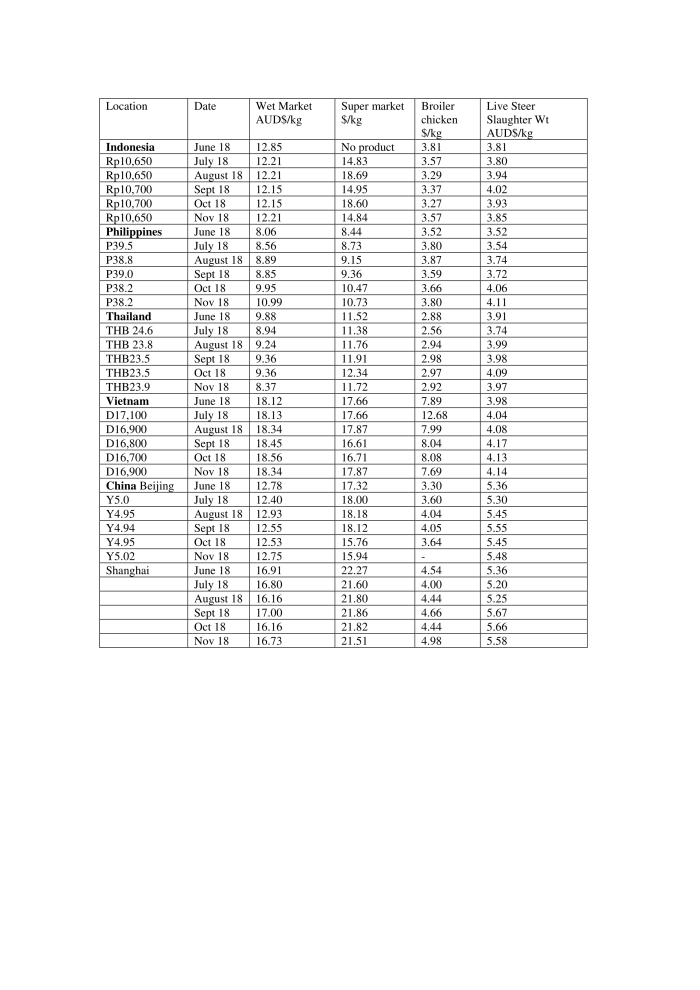