Importers had a better month during June with a slight rise in slaughter cattle prices and the disappearance of Indian buffalo beef from competitors shelves. Traders report that the slaughter steer price has eased up to Rp40,000 or more but I have used 40k as the indicator price for this month. Importers noted that the demand for slaughter cattle did not drop off immediately after Lebaran as it traditionally does. Traders also reported that Indian buffalo beef began to get short towards the end of the festival so this might explain the sustained demand for fresh beef through all of June.

I have correction to make as I recently reported that the government had stopped importing Indian buffalo beef but they have clarified (through press articles) by saying that imports are still continuing but the volumes were quite low. They did not offer an explanation why they have allowed stocks to get so low. Even those with connections into Bulog say that nobody can explain the shortage of supply except to say that more imports are on the way and expected to hit the market in mid-August. One possible explanation is the recent Foot and Mouth Disease (FMD) initiatives by India in which they have had their official FMD control program endorsed by the OIE. I am guessing that part of this official program would be declarations of the FMD status of all of India’s states/areas. In April 2019 Rabobank produced an analysis of the Indian Buffalo beef industry in which they reported that the only Indian states which were FMD free with vaccination (and therefore safe to import from) were Maharashtra, Telangana and Andhra Pradesh where only 20 of the 75 APEDA approved export slaughterhouses are located. If the Indonesian buyers were suddenly restricted to purchasing from only those states free with vaccination then this might well have caused a reduction in their capacity for supply in the short term and possibly explain the current shortfall in import volumes.

David Heath was recently travelling in the east of Bali when he came across a large truck filled with live buffalo heading west. His driver advised that they were probably from Lombok and heading for Surabaya. This unusual livestock movement would fit with the shortage of buffalo beef in Java.

Another rumour from the traders is that the government will soon issue import permits for frozen beef from Brazil and Spain. This is supported by the fact that representatives from Brazilian beef exporters were in Jakarta only a few weeks ago.

June feeder imports were almost 60,000 head following a similar volume in May. Importers are stocking up with cheaper feeders knowing that the price in northern Australia is about to rise but they may also be motivated by the approaching import permit problems when their annual review comes around in a few month’s time and they fail their 1 breeder for 5 feeder target. We assume they all have the option of creating a new company to get around the problem but perhaps the process is not so simple for all the importers. Feeder prices in northern Australia have not risen as quickly as predicted so this will also be encouraging importers to stock up before the last of the feeder cattle stocks run out. Feeder rates at the end of June were holding steady at about AUD$2.90 delivered Darwin. Reduced supplies and a surge in prices are now expected to appear in late July or August.

Simon Quilty produced the graph below in his drought article early in June showing the record slaughter rates for the Australian cow herd. When the rain does finally come and the drought is broken, the drop in supply will be swift and rise in prices very sharp. $4 per kg for feeders?

The planned Australian government reduction in stocking densities on livestock vessels has been delayed further but is expected to be introduced soon with the Department advising exporters that they will get at least 10 days notice of the new enforcement date in order to plan future livestock deliveries.

Photo above : Knuckle in the Pasar Modern in BSD City, Jakarta. Rp130,000 per kg as usual. Photo : knuckle at the Giant Supermarket BSD City. Rp195,500 per kg – no more discounts now that the Indian beef competition is gone. 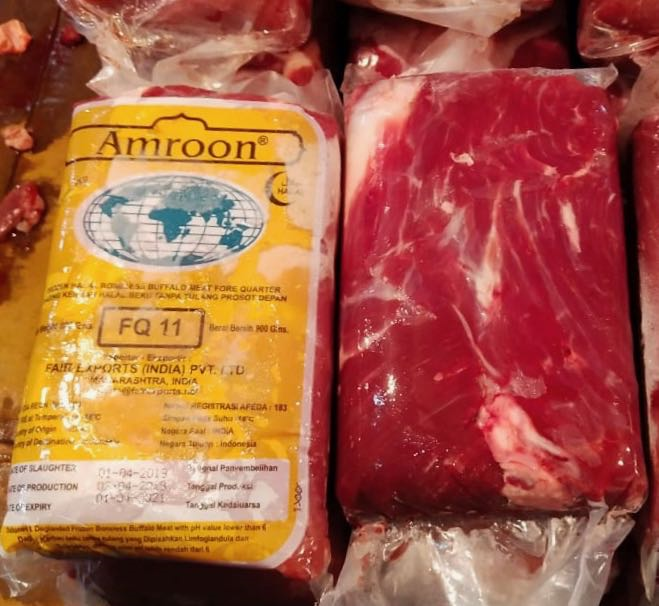 Photo : traders reported that frozen buffalo began to run short towards the end of Lebaran.

Little change in the Vietnamese market rates with the rise in the AUD price of slaughter cattle above due only to the exchange rate movements. Beef prices in the retail markets also remain steady despite the disruption created by the ASF outbreak.

Vietnam has recently been unfortunate to have outbreaks of both ASF and FMD. See the map from Rabobank below. Vietnam announced its first detection of ASF on February 19, 2019. As of June 17, 2019, the disease spread to 58 out of 63 municipalities and provinces across the country with 2,637,051 pigs depopulated, equal to nearly 9.4 percent of the country’s total swine population. As of June 4, Vietnam’s Ministry of Agriculture and Rural Development (MARD) estimated ASF damage at VND 3.6 trillion ($154.8 million). This information comes from the recent US GAIN report.

After 9 years of negotiations, Vietnam and the EU signed a Free Trade Agreement (FTA) on 30th June 2019. Only a small amount of meat and milk are imported from the EU at the moment but this is expected to increase significantly when the tariffs are cut from their current setting to 0% 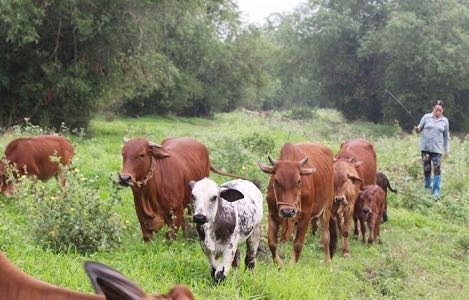 Photo from the Vietnamese press : There are always lots of press articles every month highlighting how government policies are continually at work to encourage the breeding of local cattle. The results are the same as everywhere else in Asia, disappointing.

Photo from the massive number of very professional online beef sales sites in Vietnam. Dui bo is knuckle and Dong 289,000 per kg (AUD$17.84) is a similar rate reported by my agent in Ho Chi Minh City.

Prices of beef and slaughter cattle are static in both Beijing and Shanghai. My agents have noted a rise in the pork price in Beijing this month while a rise of about 12% in Shanghai was observed last month. Perhaps this is the beginning of the major price adjustment that has been predicted as a result of the African Swine Fever (ASF) outbreak.

Rabobank forecasts that pork production could drop by 25-35% in 2019 with China’s hog herd to drop by 30-40% (150 million pigs). Consumer substitution for the shortfall is mainly with poultry and seafood but beef will also get a useful share. Their report predicts that despite strong growth in production and imports of other proteins there will still be a supply gap of 6 to 11 million tons in 2019. And import sources from Europe are at risk with ASF outbreaks in Belgium now 1km from the French border, 45km from Germany and 150km from the Netherlands.

There are so many changes going on in China that it is truly impossible to make any accurate predictions. For example, Simon Quilty produced an article explaining the Chinese advice on how and when to apply for tariff exemptions for a wide range of goods including beef, pork, chicken etc, a total of 492 items on the list. At the same time China has placed a ban on all pork imports from Canada as a response to the discovery of ractopamine (Paylean) in processed pork imports. Canada does not use Paylean. But Canada does have some serious diplomatic problems with China arising from the arrest of a senior executive of Huawei. On the 3rd of June China put in place a temporary ban on Brazil beef exports due to an atypical case of mad cow disease found in Mato Grosso state – shipments after May 31st have been temporarily banned. And who would like to predict the content or outcomes from Mr Trump’s next late night trade negotiating tweet? Pure chaos.

Cattle prices are steady with the change in the Peso against the AUD causing the price above to move to extreme levels. The economy is good and the recent seasons have been very favourable, a claim that has not often been possible about the Philippines.

Feedlot inventories are down in Thailand as a result of a sustained period of low demand resulting in a reduced supply which has now flowed through to the butchers who have pushed prices up again in order to keep their customers supplied. 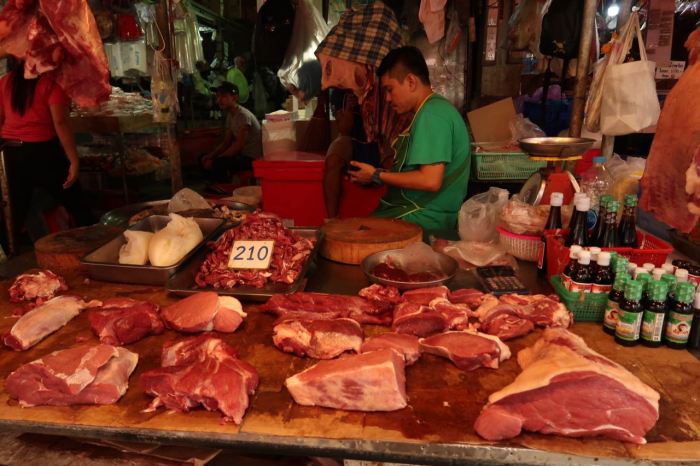 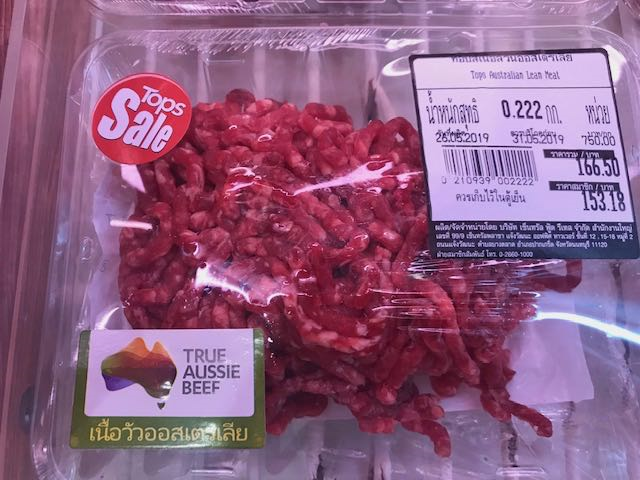 Photo from Chris King : Tops supermarket in Sukhumvit selling Aussie beef mince for Baht 750 per kg or AUD$34.88 – and that’s a sale price!

This interesting article above comes from the Myanmar Times 6th June 2019. The national herd numbers provided at the bottom of the article are much lower than earlier figures. If those numbers are correct then it is no wonder that the government is keen to promote an increase in cattle production.

My sister Tracey was in the south of France in June and took these photos at the local supermarket.

Photo from Tracey : Cote de Boeuf translates to rib steak with a price of Euro19.99 or AUD$32.24. Looks like a much better deal than the Bangkok rib eye above.

Farmed rabbit for Euro9.50 or AUD$15.32 per kg. Now that is what I call good value, way in front of the outrageous prices in Australia.