Slaughter cattle prices have collapsed as a result of the huge over supply created by the large import figures for June (60k) and July (78k). The indicator rate has fallen from Rp41,000 per kg live weight last month to Rp38,000 in November. Official updated import figures show numbers for August and September were at a much more sensible 45k level while October imports once again shot op to 65,500. Import levels of 40-50,000 feeders per month result in a stable retail market while anything above crashes the price every time.

This oversupply of fresh beef is further compounded by plentiful supplies of Indian buffalo which have finally filled up the cold stores after the shortage earlier in the year.

PT Berdikari (Persero), a state owned company, has imported the first Brazilian beef (supplied by Minerva) into Indonesia during November. While this beef may not reach the retail shelves until later in November or early December it will no doubt put further downward pressure on the price of slaughter cattle at the same time as feedlot numbers are excess to demand. See below a price list and press release photo of the first container arriving in Jakarta. As expected the retail prices are only a little higher than Indian beef and certainly a long way short of fresh beef prices so the product is likely to find a willing market. 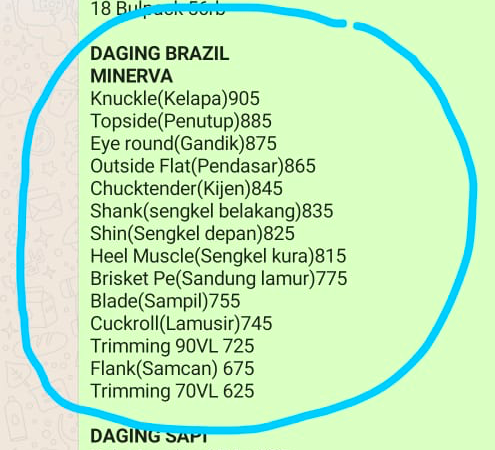 African Swine Fever (AFS) was reported in northern Sumatera during early November with large numbers of dead pigs being dumped into local waterways. The press reports suggested that both AFS and Hog Cholera were identified from samples taken from infected animals but as can be seen from the latest FAO ASF update below, the disease is yet to be officially confirmed in Indonesia. 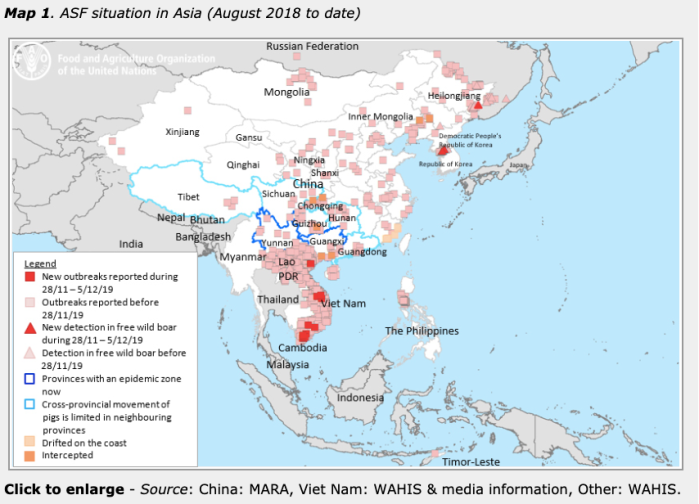 New outbreaks in red are noted in Cambodia, Vietnam and North Korea but this most recent map shows none in Indonesia.

Darwin feeder steer prices for late November have been ranging from AUD$3.25 to $3.40. I have used $3.35 for this month’s indicator price.

No change in the market rates for live slaughter cattle this month with the indicator rate for slaughter steers holding at Dong 74,000. Import numbers continue at their elevated levels with about 26,000 delivered from Australia during October resulting in the feedlot capacity of around 100,000 being about 70% utilized during November.

The ASF epidemic continues to disrupt the protein markets with retail pork prices up around 30% during November while demand is declining. Beef is a natural beneficiary of this combination of higher pork prices, reduced supplies and ongoing consumer concern about the safety of the product. 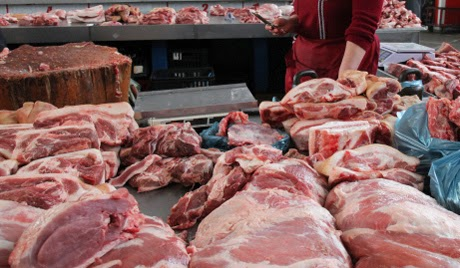 Photo from the internet : Fresh pork supplies in a Vietnamese wet market.

Vietnamese cattle farmers in the Mekong Delta are also doing it tough with a recent outbreak of Foot and Mouth Disease (FMD) in the region.

As expected the prices for live slaughter cattle in China remain strong with Beijing constant at Y32 per kg while the Shanghai price has risen from Y32 to Y34. Y34 with the RMB at 4.79 converts to AUD$7.09 per kg live weight for slaughter cattle in Shanghai. Pork prices have had another rise of 10% or more during November. These rises are despite massive efforts by the Chinese government to import all manner of meat proteins from all over the world. I have even read that although Chinese authorities are cracking down on illegal Indian beef imports they are in serious negotiations with the Indian government to establish a protocol that would permit the legal importation of Indian beef. This make a lot of sense as the product was coming in through the back door anyway so why not tap the largest single herd of buffalo beef at rock bottom prices to help plug the holes left by the missing pork production.

While ASF is the largest protein related problem at the moment the spectre of drought is rearing its ugly head to add to the woes of food producers. And the area of the most extreme drought shown in red on the map below corresponds to some of the most productive agricultural areas in all of China. The challenges just keep on coming. How can China feed one fifth of the world’s population with 1 tenth of the worlds farmland? Add a few diseases, droughts and floods and the job just keeps getting harder. It is no wonder the demand for Australian beef exports to China set new records every month. But that will only last until our drought is finally broken and then there will be very little left to sell to anyone and prices will go through the roof. I once again claim that $4 per kg live weight for feeder cattle will become a reality as soon as drought disappears from the Australian landscape.

Prices of slaughter cattle have crashed through the AUD$5 barrier with a combination of a stronger Peso and a rise of more than 10 Peso per kg for steers during November. Beef and chicken prices have risen in both the wet and supermarkets while pork prices have fallen once again, no doubt associated with the massive disruption created by ASF.

My agent also told me that he met up with some beef traders from the north of Mindanao who were visiting the south to try to find a new supply of beef as theirs had run dry. Unfortunately for them there was little product to be found and only then at prices they were unable to afford. This is another strong indicator that the live trade as well as the box beef trade to the Philippines is likely to ramp up in the near future. And the Philippines is the 10th largest importer of Brazilian beef! See the graph below showing that they imported 27,000 tons in 2018.

Slaughter cattle prices have remained steady during November with the indicator rate holding at 87Baht per kg live weight.

In my September report I wrote that the Thai market was looking forward to the opening of a large Chinese abattoir near the Myanmar/China border which would process both Burmese and Thai slaughter cattle. I have now been advised that the new abattoir which is planning to slaughter imported Thai cattle in the very near future is actually located near Kunming. The latest information suggests that it will be up and running during January with demand and prices for Thai cattle expected to rise accordingly.

I recently visited Brisbane for a family get-together so all the Aussie relatives could meet our new granddaughter who had flown in with her Mum from the USA. We stayed at a house in Newfarm, a few hundred meters from the Petersens’ butcher shop on James street and about 1 km from a new Woolworths supermarket. As you can see from the photos below the Woolies presentation is outstanding as usual. The instore butcher shop is a ripper with beautifully presented, top quality product at reasonable prices.

So how can a small, traditional style suburban butcher shop compete with the retailing might of Woolies? By doing the sort of value adding that is too hard for the larger companies. As well as the usual broad butcher shop range, the owner and chef , Debra Sandford, offers a huge range of delicious options including meaty soups, pies, Irish stew, curries, stroganoff, lasagne, cheese, sauces, fish, game meat and many more all cooked to order on the premises using local produce wherever possible. This very busy lady offers catering for large parties, supplies a number of restaurants and will even produce vegetarian and vegan meals to order. Woolies is good but they can never complete with that level of creativity, flexibility and owner/operator yard work. Their Christmas ham gets a score of 9.9/10. This beef cabinet is a little untidy only because of the very large number of customers constantly taking lots of product. It must be a major job to continually restock these shelves.