Slaughter steer prices remained weak during February through a combination of slow demand and continued high numbers of overfat cattle attracting discounts. I have used an indicator rate for this month of Rp39,000 per kg live weight which is the same as last month. Fortunately the level of imports appears to have slowed down significantly so the backlog of excessively heavy cattle should be cleared during March. The average live cattle import numbers for the last 12 months has been about 55,000 per month for Indonesia and 24,500 for Vietnam. November and December 2019 imports were close to these averages while in January 2020 the numbers changed drastically to 30,500 head for Indonesia and 42,800 for Vietnam.

Viruses are affecting the economy in Indonesia in a variety of ways with the main one still being the Corona virus leading to a reduction in tourism in Bali. Chinese tourists were the largest single group coming to Bali at 30% with this number now zero since flights from China were banned over a month ago. Many hotels are empty with airlines, retail and restaurants also hard hit. At the same time African Swine Fever (ASF) has devastated the pig industry in north Sumatera while an undiagnosed disease continues to kill very large numbers of pigs in Bali. See Bali Sun photo below. So many pigs have died that many of the bodies have been dumped into local rivers and been flushed out to sea during the recent monsoon rains. Some bloated bodies have even landed back on the tourist beaches at Kuta and Seminyak. Not a good look at a time when Bali tourism needs all the help it can get. 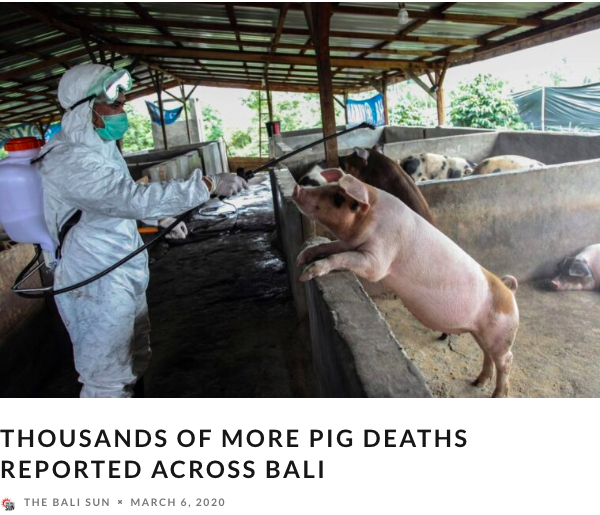 Another odd side effect of the corona virus is that onions have disappeared from the shelves of most shops across Indonesia. When I asked the traders in the wet market they explained that the price for what they call “Bombay onions”, which is what we know as the common onion in Australia, have gone up in price from about $2 per kg to $10 per kg in 3 or 4 weeks. As a result most retailers don’t even bother to stock them. My advice is that these onions are imported from China. At the same time spices like ginger and turmeric are in great demand and going up in price as they are regarded as good natural agents to protect against respiratory viruses. 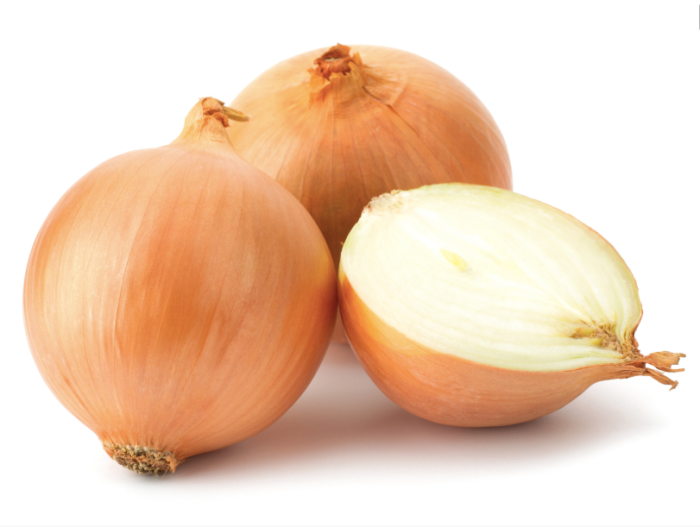 Photo : The humble onion, AUD$10 per kg in the unlikely event that you can find any. Another victim of Corona?

On Friday 6th of March the Indonesian government officially announced the opening of import permits for Indian buffalo meat of 100,000 tons through Bulog, the state owned logistics company. Bulog advised that at the moment their remaining stocks are down to around 1,000 tons although this does not take into account what might still be in commercial cold stores. 25,000 tons will be imported as quickly as possible to ensure buffalo beef supplies are adequate for the forthcoming Ramadan and Lebaran festival periods during April and May. Considering the slow process of permit issuing and the subsequent purchase process and ocean freight, this delivery is in danger of arriving late for the party if everything doesn’t run very quickly and without any hitches. Permits for Australian fresh and frozen product have continued in 2020 without interruption with plenty of stock on hand and new imports flowing well through the supply chains.

If you check the OIE website for Foot and Mouth Disease (FMD) status around the world, India is now listed as having an “Endorsed Official Control Program”. See the OIE statement pasted below and below that a current map of the world FMD status as at February 2020. While some of the countries show “no official status for FMD” because there is inadequate information on the disease, the majority are given this status because they are infected. India is infected with FMD with no areas that are currently certified as “Free with vaccination” as there are in Brazil. Fortunately, FMD is a virus disease that is quite difficult to spread through processed frozen beef that has been deboned and deglanded so the risk of Indonesia developing FMD from imported Indian buffalo is small. What is not obvious is why import permits are being opened for Indian buffalo beef which is known to be infected when real cattle beef could easily be sourced from Brazil with its status of “free with vaccination”, a much safer option in terms of risk of disease transmission and a much better quality product. The price differential in the retail market indicates that Brazilian beef is only around 10-15% more expensive than Indian buffalo. I know if I was given the option of paying 15% more for a dramatically lower risk of introducing FMD virus to Indonesia with a better quality product, I would have no hesitation of voting for the Brazilian option every time. My advice at the moment is that no new permits have been issued as yet for Brazilian beef for the calendar year 2020. 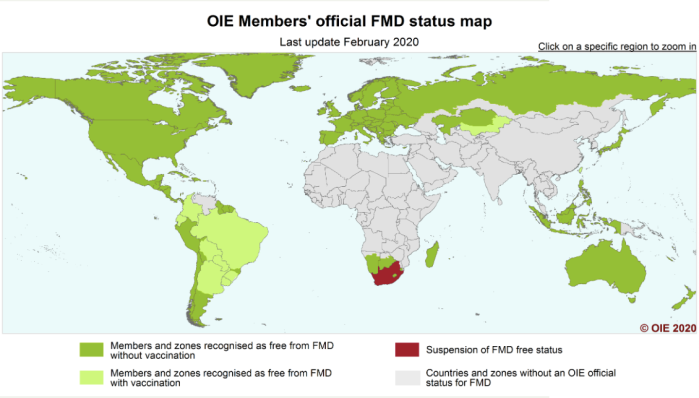 Darwin feeder steer prices have shot up as expected with the arrival of quite good monsoon rains during February. As at the end of the month the indicator rate for steers landed Darwin was around $3.80, up about 16% on January.

Domestic beef prices remained steady during February even after the surge of importation from about 28,000 head in December to 42,800 in January. There appears to be an easing of the ASF situation with the beginning of a slow recovery from the worst of the outbreak. Pork prices have reduced by about 10-15% during February although how much is due to the reduced demand after Tet and how much is a reflection in improved pork supplies is not clear.

The government of Vietnam continued its activities to improve protein supplies by licensing 460 new meat product suppliers and 210 seafood suppliers from the USA during February.

Slaughter cattle prices in February were Y33 per kg live weight, the same as in January, with the large jump in the AUD rate above due to the weakening of the AUD$. This is the first time the rate has broken through the $7 barrier since this report commenced in 2014. But the real story of course is the corona virus which is having such massive and surprising affects world-wide. Who would have guessed that a new human virus in China would result in the disappearance of onions from the markets in Indonesia? As I have recently learned, Wuhan is a major manufacturing centre supplying essential parts for global manufacturing enterprises. The resulting shortages in parts is now leading to the shutdown of factories around the world that can’t continue without these critical components from Wuhan. etc. etc. My agent in Shanghai advise that they have only just been able to go back to work for the first time after several weeks isolation at home.

The only thing that I am confident about is that we are not being told the truth about the real facts and figures of this epidemic so it is simply not possible to predict how it might play out. If what we are currently told actually represents a significant under reporting of the facts then we are probably in for a longer and more severe impact on human and economic health across the world.

The spectacular rise in the AUD rate above, smashing through the $6 barrier, is due to a combination of a 13.5% increase in the local slaughter cattle price and a further strengthening in the Peso against the AUD (P34.8 to the AUD last month).

My agent reports that the rise in cattle prices is the result of a straight forward shortage of supply with demand remaining generally steady. Surprisingly, this collapsing supply has led to no more than one live cattle shipment in December and one in January. At the same time pork prices are collapsing following the ASF outbreak which has now spread to Mindanao. See photos below of the quarantine efforts practiced at the entry to General Santos city, a major trading centre in the south of Mindanao. 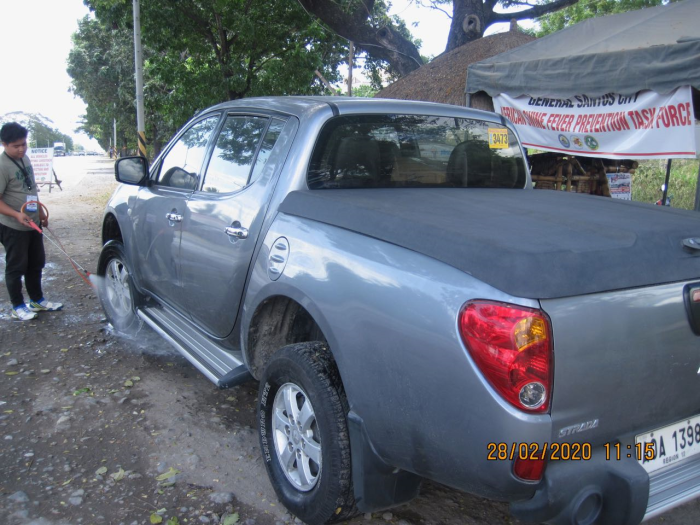 Thai slaughter cattle prices have slipped since last month from 106 to Baht 96 as the expected demand from China failed to materialise. Considering the turmoil that must be occurring in every aspect of Chinese life and business, it is not surprising that the establishment of a very large slaughtering facility and the extensive and complicated associated logistics requirements have not all fallen into place in the predicted time frame.

What is it with people and their dogs?

Lynette and Zealie passed through Milan for the christening of our granddaughter in January. See below several photos of people taking their dogs into a large butcher shop in Milan. Quite unnecessary and a health hazard.

But that is nothing compared to the bottom photo which shows a bloody dog travelling Emirates business class from Milan to New York. Yes. True. This mut was with a family, mother and baby in one seat, dad in another seat and Rover with his own business class seat. I googled the price of the ticket and it is currently running at a discount rate of AUD$2,800 but this is probably much lower than usual because of the corona outbreak in this part of Italy. In any sense, Outrageous.